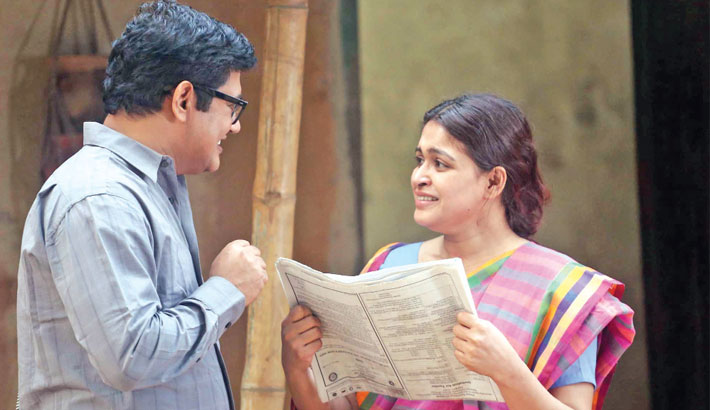 On the upcoming occasion of the birth centennial of Bangabandhu Sheikh Mujibur Rahman, a special-length film ‘Jonok O Shontan’ has been made. The film is based on the story of a Birangona, who wants to meet Bangabandhu.

Popular actors Ahsan Habib Nasim and Rani Ahad have played the lead roles in the film. Rani will be seen as the Birangona and Nasim has portrayed the character of a teacher. Mahmudul Islam Mithu, Binoy Bhodro, Iqbal, Reshmee and others have played important roles in the movie.

The film’s story has been written by Shoaib Choudhury, while screenplay and dialogues penned down by Ferari Farhad. Freedom fighter and film director Nur Muhammed Moni has directed the movie.

The shooting of ‘Jonok O Shontan’ has concluded recently in the capital’s 300 feet area.

Director Nur Muhammed Moni said, “Being a freedom fighter, to me Bangabandhu always has a very special place. The story and screenplays of this film are extremely powerful.”

Ahsan Habib Nasim said, “Thanks to Moni bhai for involving me to this project. As it is a special film I have tried my hundred percent to bring out my character. With Rani this is my first work and she is very serious about acting.”

Rani Ahad said, “I am honoured to be a part of this film. I was getting emotional in each of the sequences of the film and felt the pain of a Birangona. I have tried my best and hope, people will appreciate our work”.

‘Jonok O Shontan’ is produced by Crown Entertainment. The executive producer is Tajul Islam. The movie will be released on a private satellite channel in March next year on the occasion of the birth centennial of Bangabandhu.