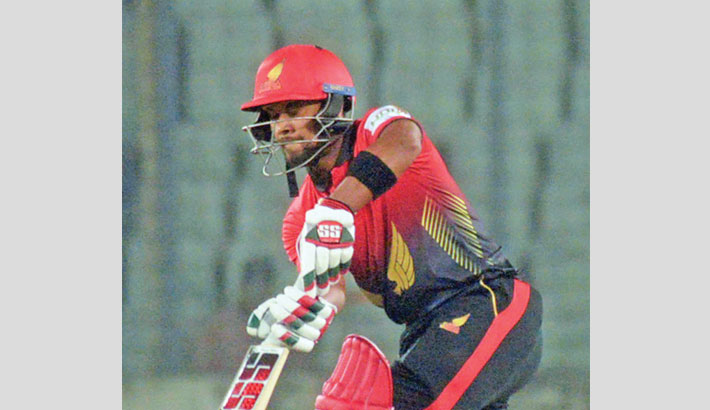 The Lankan illuminated the first day of Bangabandhu Bangladesh Premier League (BBPL) with a sublime batting show to guide his side to a 105-run win over Rangpur Rangers in their opening game at Sher-e- Bangla National Cricket Stadium in front of the handful of crowd available at Mirpur.

Shanaka, who hammered a 31 ball-75 not out comprising three smashing fours and 9 towering sixes, came up with his ruthless best, especially in the last two overs which eventually gave his side a respectable total of 173 runs for 7 wickets.

Cumilla amassed 51 runs in the last two overs, with Shanaka himself making 46 runs at that point. 7 of his 9 sixes came at this juncture as he struck 4 sixes off Mustafizur and 3 sixes off Junaid Khan.

“It (hitting sixes) comes from training. Back home I train very hard and I think this is the result,” Shanaka told reporters at Sher-e-Bangla National Cricket Stadium after the match.

“Actually I took ten to twelve balls to settle in then I got my timing perfect and that’s why I got the success,” he said.

“Actually I have hit more sixes and I enjoyed hitting the sixes,” he said.

Shanaka feels that more than power, technique is required to hit sixes and said that he was working to improve on his technique.

“I do not practice six-hitting that much,” said Shanaka.

“I practice (to improve) my technique. Actually when I started off in cricket, my technique was not very good and now I settled to a better one which suites my game,” he said.

Shanaka, who hit 4 sixes in a single over of Mustafizur, said that he was well aware of how Fizz bowls considering he had played with him couple of times earlier.

“I have played against him three to four times,” said Shanaka.

“I know exactly what his plan was and I was waiting for his (Mustafizur) slowers,” he said.