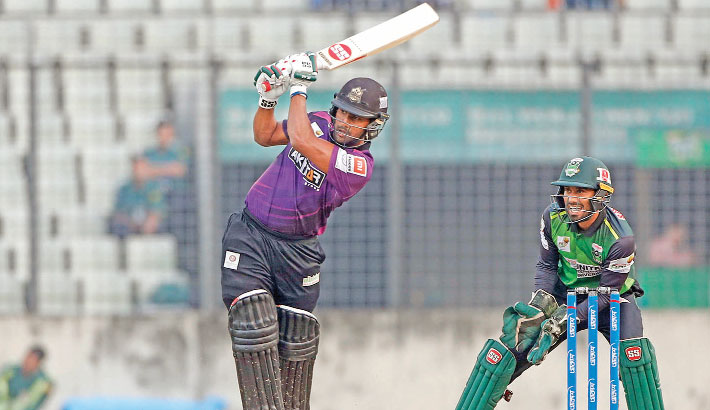 Mithun struck his career-best 48 ball-84, a knock that could easily be termed as one of the best T20 knocks played by Bangladeshi batsmen as Sylhet racked up a respectable 162-4.

But Chattogram, led by captain Kayes, who just came off a horrific India series, made a mockery of it, scoring 38-ball 61 runs and reached the target in 19 overs scoring 163 runs for 5 wickets.

Challengers were struggling at 42 runs for 3 wickets in six overs as left-arm spinner Nazmul Islam Opu removed Junaid Siddique and Nasir Hossain in consecutive deliveries to give the double blow before Krishmar Santokie, the West Indian slow-medium bowler dismissed Avishka Fernando who smashed 3 fours and 3 sixes in his 33 runs off 26 balls.

The situation worsened when Sylhet captain Mosaddek Hossain Saikat took the wicket of Ryan Burl for 3 runs, with Chattogram down at 64 runs for 4 wickets.

Kayes came up with his dazzling best when it mattered most bringing up all kinds of shots from his repertoire to put the opponent bowlers into disarray.

He got a perfect foil to him in Chadwick Walton and the duo combined for 86 runs for the fifth wicket stand to take the side on the verge of victory.

Fast bowler Ebadat Hossain dismissed Kayes, after he struck 2 fours and 5 sixes in his 38 ball-61. However Walton remained not out on 49 runs off 30 balls with 3 fours and 2 sixes to help the side sail home with ease.

“I never took any pressure while batting. There is no point in taking pressure,” said Imrul.

“I tried to enjoy my batting throughout the innings and took the challenge,” he said adding that he is not very interested in the criticism regarding his lean patch in the series against India.

“I am not worried about the criticisms. As I am a star cricketer, criticism will always be there,” he said.

Earlier, Mithun’s show gave Sylhet a respectable total after a slow start. His unbeaten 48-ball 84 runs where he struck 5 fours and 5 sixes, indeed propelled the side past 150 runs as the other batsmen couldn’t bat at a higher strike rate in a pitch which was conducive to the batsman.

Opener Johnson Charles’ 23 ball-35 was the only other innings apart from Mithun that was at a strike rate of over 100.

Rubel Hossain claimed 2 wickets for 27 runs while Nasum Ahmed and Ryad Emrit picked up one wicket apiece for Chattogram.