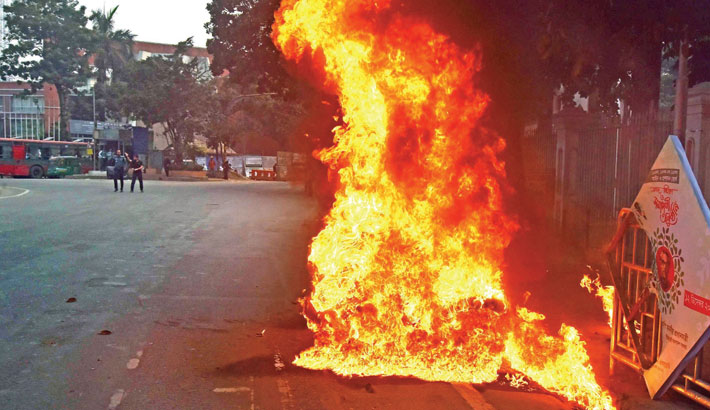 A motorbike is set on fire by miscreants in front of a gate of the Supreme Court in the capital on Wednesday. - sun Photo

BNP supporters and activists are allegedly trying to create panic by arson attacks in front of the Supreme Court and other places over party chairperson Khaleda Zia’s bail issue.

The Appellate Division is set to hear today a bail petition of Khaleda Zia who has been imprisoned in two graft cases.

Sources in law enforcement agencies suspect that BNP supporters were behind the torching of vehicles to intimidate the court ahead of the bail hearing.

Earlier, two buses were set afire in the capital on December 7 shortly after the court adjourned the bail hearing until December 12.

On Wednesday, two motorcycles were torched near two gates of the apex court while another in front of the Bar Council premises, sources said.

Abul Basar, inspector (patrol) of Shahbagh Police Station, said he was in front of the Jatiya Press Club at the time of vehicle torching. “I rushed to the spot and firefighters doused the flames.”

Dhaka Metropolitan Police (DMP) has taken all measures to fend off any untoward incident.

Security in and around the Supreme Court area and other strategic points in the capital has been beefed up.

Earlier on December 5, pro-BNP lawyers and outsiders resorted to mayhem in the Appellate Division of the Supreme Court to pressurise judges to grant bail.

The CJ said, “We won’t listen to anything else right now. There should be a limit to everything. This is unprecedented. I’ve never seen such a situation in court before.”

The Attorney General said, “BNP lawyers have brought their movement to the court and created chaos.”

Judges of the Appellate Division left the courtroom deferring the hearing until December 12.

The court asked for such a report as the BNP chief prayed for bail, mentioning her serious illness.

Accordingly, the BSMMU submitted a report to the apex court on Wednesday.

Khaleda Zia has filed an appeal with the Appellate Division challenging the High Court order that rejected her bail in Zia charitable graft case.

She is facing seven years’ imprisonment awarded by the lower court in the case.

The BNP chairperson, who is facing over 30 cases for corruption and criminal charges, has been in jail since February 8 last following her conviction in the Zia orphanage trust graft case.

Later, she was sentenced to seven years in prison in the Zia charitable trust graft case.