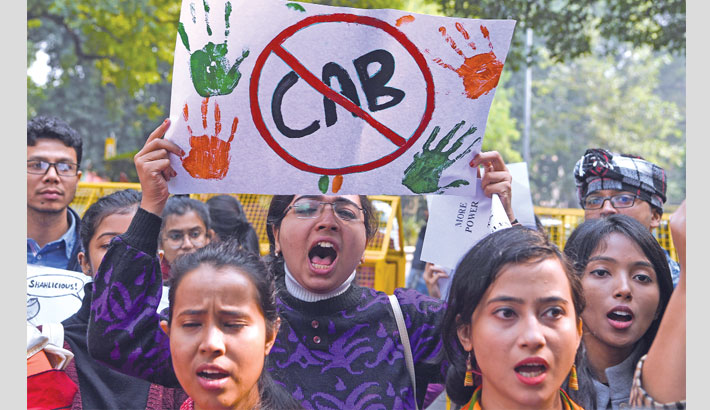 GUWAHATI: Protesters in northeast India set fire to tyres and cut down trees to block roads on Tuesday in a shutdown across the region hours after lawmakers approved the government’s new citizenship bill, reports AFP.

The legislation, set to go before the upper house on Wednesday, will fast-track citizenship claims from refugees from three neighbouring countries—but not if they are Muslim.

For Islamic groups, the opposition, rights groups and others this fits into Prime Minister Narendra Modi’s Hindu nationalist agenda to marginalise India’s 200 million Muslims—something he denies.

People in northeast India object for different reasons, fearing that large numbers of Hindu migrants from Bangladesh who they say are intruders will be given citizenship.

On Tuesday the region sandwiched between Bangladesh, China and Myanmar was crippled by a general strike called by dozens of organisations, with buses off the roads and most schools and shops shut.

“The bandh (strike) have drawn a total response in the northeastern states,” said Samujjal Bhattacharyya from the powerful umbrella group the North East Students’ Organization.

“We have made it clear ... that CAB (the Citizenship Amendment Bill) will not be accepted and we are going to intensify our agitation,” he told AFP.

“Assam and northeastern states had already taken a huge burden of illegal foreigners,” he said.

India’s lower house passed the bill just after midnight following a fiery debate that saw one Muslim MP compare the government to the Nazis.

Once law, it will make it much easier for Hindus, Sikhs, Buddhists, Jains, Parsis, and Christians fleeing Afghanistan, Bangladesh and Pakistan to become Indians.

Modi’s government says Muslims are excluded because they do not face persecution in these three countries. Also excluded are other minorities fleeing other countries such as Tamils from Sri Lanka, Rohingya from Myanmar and Tibetans from China.

“This bill is in line with India’s centuries old ethos of assimilation and belief in humanitarian values,” Modi tweeted. “I say this again and again that this bill has nothing to do with the Muslims in this country,” Home Minister Amit Shah told parliament.

Shah has stoked further fears among India’s Muslims with his aim to conduct a nationwide National Register of Citizens (NRC) that he says will see all “infiltrators” excluded by 2024.