‘Bowling in partnership will be key’ 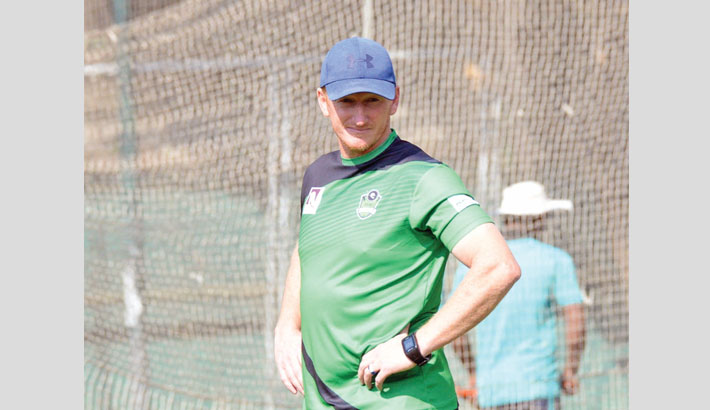 Thunder is all set to counter Chattogram Challengers on the first encounter of Bangabandhu Bangladesh Premier League and according to their bowling coach Nantie, to make things work for them bowling in partnership will be the key.

“If one guy bowls and one other struggles (it will be tough). We all work together as team. So, everyone is trying to work together to make it work,” Nantie told daily sun at Sher-e-Bangla National Cricket Stadium on Tuesday.

Hayward said if one bowler gives less runs than other bowlers need to pick up wickets in order to make the partnership work but noted that line and length can also be crucial while bowling.

“If one goes for few, the other doesn’t but keeps it tight, you should pick up wicket as well. That’s very important for me,” he said.

“Sometimes if you bowl on good length on these kinds of wickets, I won’t say what lengths we want to bowl but yes if you bowl in proper lengths, one can get away with a lot,” he added.

The right armed fast bowler, who made his debut for South African national side in 1999 against England, was famous for his genuine pace and ability to get bounce.

In terms of being successful with ball, Nantie said bowlers need to explore the strong areas of the batsmen so that they can keep it simple which he later labeled as the most important thing.

“Explore different batters. Know where their strengths. So, bowl outside those strengths, and keep it as simple as possible,” Nantie said.

“That’s I think is the most important thing for young bowlers. To keep it simple,” he added.

Starting with a haphazard run-up with full of attitude, Nantie later altered his run-up but the pace was still there and used to bowl with an attitude that had no point whatsoever in making friends with batsmen.

Nantie admitted that the shortest format of cricket is mostly dominated by the batsmen but said bowlers should also value every opportunity in T20 cricket.

“But there is also an opportunity for bowlers to get in to the games and when you get that opportunity, you must cherish at the opportunity,” told Nantie.

“As a batting side, it’s all about scoring and make it count, I think if you want to be successful, one of your top focus should be to bat straight through the innings at a strike rate of 120. And the rest can come and go. I think that’s the mantra for anyone who wants to be successful,” Nantie told reporters.

As Sylhet have made up a team mostly with local players, Nantie believes ‘bonding’ between the players of his squad is the main strength of his team in the tournament.

“We are young team, to be honest. We are passionate and players want to learn,” Nantie said.

“But I think our strength is- bonding, togetherness, wanting to do well and also on the big stage, we want to explore and want to show people what they all about,” he added.

Before becoming a coach, Nantie played for Derbyshire until his retirement from cricket in 2012. The South African said coaching Sylhet will be his ‘way forward’ as a coach as he hopes to help the youngsters.

“That’s the way forward. It is always important to do well and help the youngsters. I also said at the start, if there are youngsters around, I’d like to help,” Nantie concluded.