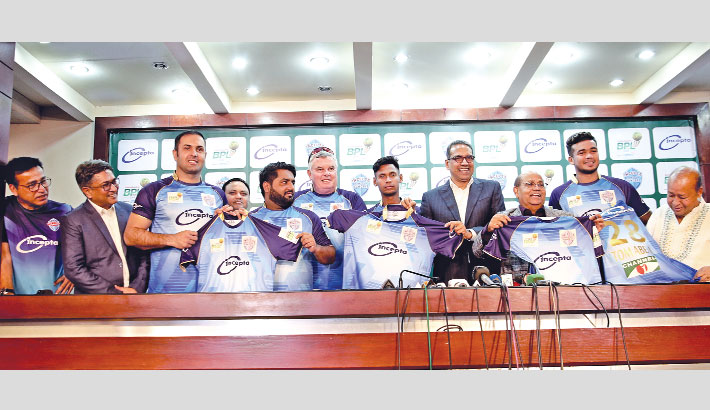 Rangpur Rangers’ skipper Mohammad Nabi said on Monday that they have got the right mix to go far in the upcoming Bangabandhu Bangladesh Premier League (BBPL) scheduled to start today.

Rangers will start their campaign against Cumilla Warriors in the second game of BBPL at Sher-e-Bangla National Cricket Stadium on Tuesday.

“Most of the young talents are there and we have the experience of overseas players,” Nabi told reporters during the jersey unveiling ceremony at Sher-e-Bangla National Cricket Stadium on Monday.

“Thanks to the management for trusting me as the captain if Rangpur Rangers and Inshallah we will try our best to come up with a winning combination,” he said.

“It is not new for me in Bangladesh, because for last eight to nine years I am playing in Bangladesh every year. I am either playing at Dhaka, Chattogram or Sylhet. So, I know the conditions and everything,” he said adding that he is not aware of the BBPL provision of fielding a leg spinner in the playing eleven of every team.

“I do not know about the leg-spinner rule. If there is such a rule, we will definitely field a leg spinner. We will discuss with management about the rule,” said Nabi adding that adaption is the key to do well in the tournament.

“We need to be a quick learning side and as I told before I know the conditions very well. There will be dew in the latter part of the day most of the time,” said Nabi.

“The condition of the pitches will be fluctuating as the wicket will be different in first innings compared to the second innings,” he said adding that he is not concerned with the form of Mustafizur.

“It is not important that Mustafizur is not in form as he will return stronger than ever. We will work as a unit and as a team. We will discuss about his problems and we will make him play every single game and work together,” he said.

Meanwhile, Cumilla Warriors’ pace bowler Al Amin Hossain said that they are confident that they can put up a good fight in the tournament and added that he is not concerned despite many of his teammates are yet to arrive.

“Basically lot of my teammates went to SA games and earned the gold and they will join us tomorrow (Wednesday). At least four of my teammates are there but there is no need to worry as they are playing cricket,” he said.

“We are confident that we have a good chance in the competition,” he said.

Warriors later said that Dasun Sanaka will lead the team in the upcoming BPL.