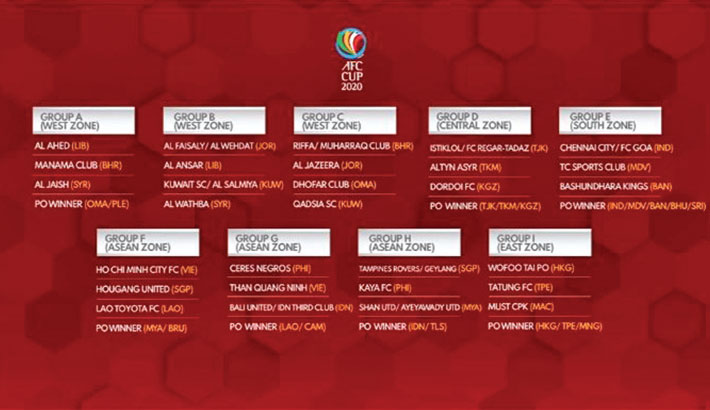 Bangladesh Premier League (BPL) champions Bashundhara Kings have been placed in the Group E (South Zone) of the upcoming AFC Cup 2020 that is scheduled to begin on February.

The grouping of the meet held at the AFC House in Malaysian Capital Kuala Lumpur on Tuesday.

The BPL Champions will play against TC Sports of Maldives, one of the two Indian clubs — Chennai City FC or FC Goa and the winners of South Asia Zone play-offs.

Earlier, Bashundhara Kings President Imrul Hassan voiced his goal to establish Bashundhara Kings as one of the best clubs of Asia and hoped that his new recruits will be able to deliver on their promise and bring in outstanding result for the club in AFC (Asian Football Confederation) Cup.

“Our goal is much grander than Bangladesh Premier League. We want to establish Bashundhara Kings as one of the best clubs of Asia. Kings will become Asian giants. We have been working hard to attain this goal,” told Imrul Hassan

“We have officially commenced the player signing procedure. We will also bring in some new faces under our ranks. I am hopeful that these new recruits will lead to Bashundhara Kings becoming a much stronger team than the previous season,” stated Imrul Hassan.

“I think our new signings will help us to give a good fight in the upcoming AFC Cup. But it’s not about just this edition of AFC Cup, our target is a lot larger than just a single tournament. We are working on reaching that goal,” added Hassan.

Fresh signing, Yeasin Khan was exhilarated to be part of Bashundhara Kings family due to the excellent benefits the club provides for the players. He also hoped that he will be able to hold on to his good form for the national side and perform for Bashundhara Kings especially in AFC Cup.

“That’s why I decided to join Bashundhara Kings as they have a well-rounded team. Me along with the rest of the team hope to gift a good result for putting their trust on me. We have a big tournament coming cup in the form of AFC Cup and we intend to put on our best show in that tournament,” added Yeasin.

Five teams will compete in the South Asia Zone play-offs to confirm their spots in the four-team Group E (South Zone).

Bhutanese club Paro FC will play against Sri Lankan club Defenders FC in the double-leg preliminary round 1 on January 22 and 29.

The two winners of the preliminary round 2 will play in the double-leg final of South Asia Zone play-offs on February 19 and 26.

A total of 48 Asian clubs — split into five groups - were taking part in the regional meet.