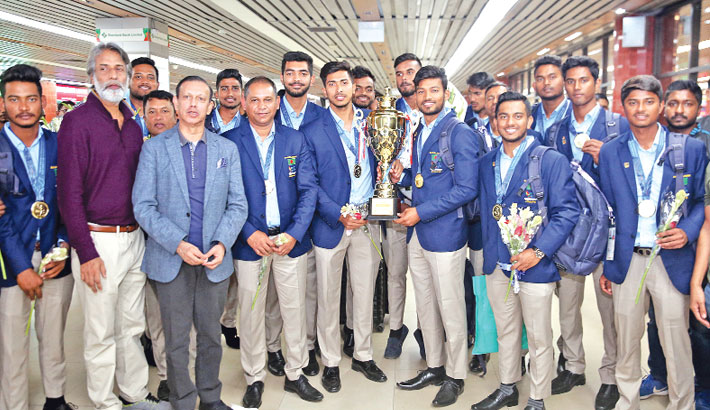 Players of Bangladesh Under-23 National Cricket Team pose with the trophy of South Asian Games cricket event upon their arrival at Hazrat Shahjalal International Airport in the capital on Tuesday. — SUN Photo

The 13th South Asian Games in Nepal concluded on Tuesday with India finishing on top with 312 medals comprising 174 gold, 93 silver and 45 bronze medals.

Prime Minister KP Sharma Oli on Tuesday extended gratitude to one and all for making the 13th South Asian Games a grand success. 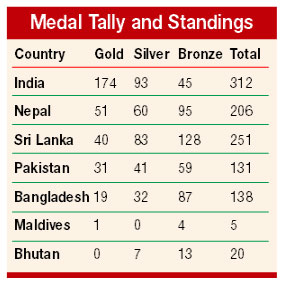 In a brief video message, Oli said: “I would like to extend sincere thanks and deep appreciation to all member states and players for their active participation in the 13th SAG and making it a grand success.”

He said that the SAG has further promoted understanding, goodwill, harmony, unity, and solidarity among the people of South Asia.

Winning the gold for the second time in men’s cricket, Bangladesh also strengthened their best SA Games performance outside the country. In 1995, Bangladesh had won seven gold medals in Madras SA Games, which was Bangladesh’s best SA Games display abroad.

In the final of SA Games Men’s cricket, Bangladesh won the toss and opted to field first. Sri Lanka posted 122 runs all-out in 20 overs. The tremendous efforts of the Bangladeshi bowlers set the foundation to win another gold in the event.

Sri Lankan openers posted 36 runs in the first wicket stand which was indicating a big total. But before posting 100 runs on the board, Sri Lanka lost seven wickets.

In reply, Bangladeshi openers Saif Hassan and SoumyaSarkar added 44 runs in the first wicket stand and it was enough to lay down a solid base for a big win. Soumya fell for 27 off 28 with four fours while Saif posted 33 off 30 with three fours and two sixes.

After the dismissal of the openers, captain Najmul Hossain Shanto took the responsibility to guide the team to victory. Yasir Ali also contributed scoring 19 off 16 deliveries. Shanto remained unbeaten for 35 off 28 with two fours and one six while AfifHossain also remained unbeaten for five off seven balls.