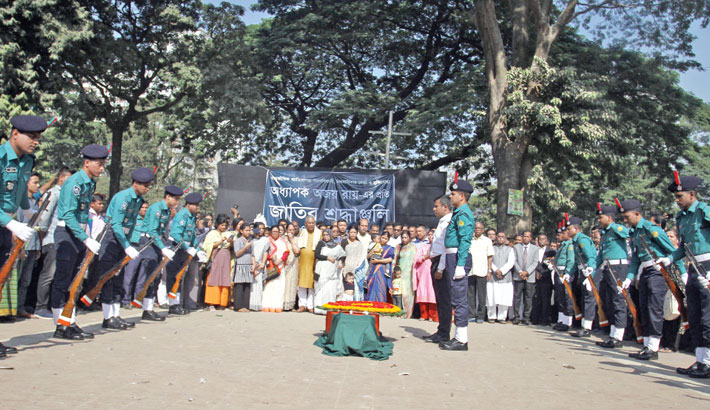 Policemen form a guard of honour as the coffin of noted educationist Prof Ajoy Roy was kept at the Central Shaheed Minar in the capital on Tuesday. — SUN PHOTO

People from all walks of life paid their last tributes to noted Dhaka University Professor Ajoy Roy at the central Shaheed Minar premises on Tuesday morning.

The body was kept at central Shaheed Minar in the capital from 11.20am to 12.35pm where people and different organisations paid respect by placing wreaths.

From Shaheed Minar, his body took to Birdem Hospital as he donated his body to the hospital before death, said his younger son Anujit Roy.

After paying respect, noted professor of Bangla Department of Dhaka University Abul Kashem Fazlul Huq told the daily sun, “Ajoy Roy was a great intellectual person. He was also general secretary of Dhaka University Teachers’ Association (DUTA) during the Liberation War. He actively participated in the liberation war. He also played an important role in making the laws of autonomy of the Dhaka University.”

Prominent actor and film director Syed Hasan Imam said, “Ajay Roy was quite a non-communal and cultural minded man. He was always active in implementing the spirit of the liberation war.”

DU VC said, “Dr Ajoy Roy was a renowned professor and freedom fighter. He actively joined at all democratic, progressive and citizen movements in the country. He will be remembered for his great contributions to education and scientific research.“

Professor Ajoy Roy, father of slain blogger Avijit Roy, passed away at BIRDEM General Hospital in the capital on Monday. He was a retired teacher of the Dhaka University’s Physics Department.

He was also the founder of Ekattorer Ghatak Dalal Nirmul Committee. He played a key role in the movement seeking trial of the war criminals and was best known for his prominent role in human rights activities and freethinking. He received Ekushey Padak, the highest civilian award of Bangladesh, in 2012.