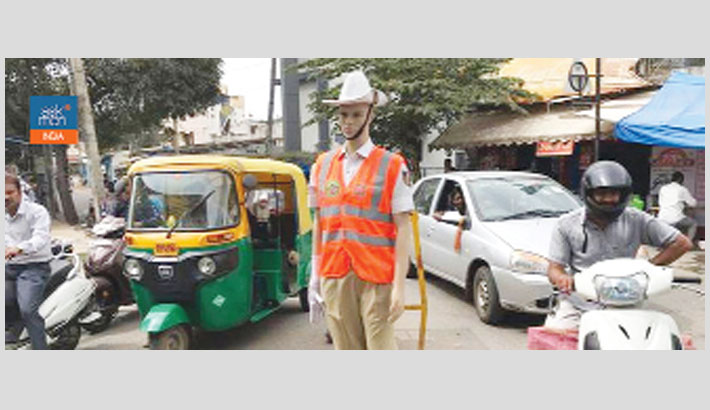 One of India’s most gridlocked cities has come up with an unconventional solution to rein in errant drivers.

Mannequins dressed up as traffic police have been placed on roads in the southern city of Bangalore, reports BBC.

Dressed in police caps, white shirts and brown trousers, and wearing sunglasses, the mannequins are now on duty at congested junctions.

It’s hoped drivers will mistake them for real police and think twice about breaking the rules of the road. Home to India’s IT industry, Bangalore has eight million registered vehicles on its streets. This number is expected to grow to more than 10 million by 2022. At 18.7 km/h (11.61 mph) traffic speeds in the city are the second slowest in the country after Mumbai (18.5 km/h), according to a study by an office commute platform, MovinSync Technology Solutions. Cameras at traffic junctions have recorded more than 20,000 traffic violations every day.

But commuters have mixed feelings on whether mannequins can actually step in to help their real police counterparts.

Some feel they do.

“They look good. It is only when you look closely that you feel it is not a real police constable. So it is making people wear their helmets at traffic junctions and drive their two-wheelers,” says Gautam T, a college student.

Gautam and his college mate Talah Fazal had taken a selfie with one of the mannequins placed in the southern part of the city.

Image copyright Asif Saud  Similarly, Saravana - who goes by a single name - and drives a three-wheeled auto-rickshaw, had parked his vehicle near a no-parking sign board right next to a mannequin in the central business district. But he said: “It makes you not jump the traffic signal.”

On Twitter, the tone has been largely one of amusement and derision.