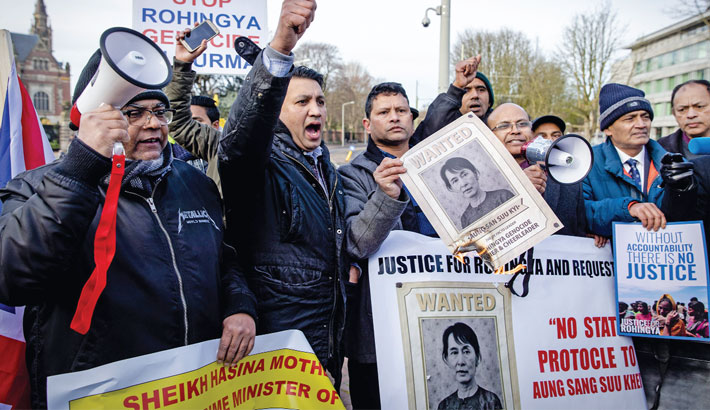 Protesters hold portraits of Myanmar leader Aung San Suu Kyi as they take part in a demonstration in support of the Rohingya Muslim minority in front of the Peace Palace in The Hague on Tuesday. — AFP Photo

A three-day landmark hearing on Myanmar’s alleged ‘genocide’ on minority Muslim Rohingyas opened at The Hague on Tuesday, where human rights defender Aung San Suu Kyi was asked to ‘stop genocide’ in her country.

The hearings are based on a lawsuit filed last month at the United Nations-sponsored International Court of Justice in The Hague by the small West African Muslim-majority nation Gambia, on behalf of the 57-member Organization for Islamic Cooperation.  Gambia is accusing Myanmar of violating the 1948 Genocide Convention.

Foreign Minister AKM Abdul Momen told the daily sun on the hearing that “it went very well and Gambia made a strong presentation highlighting that Myanmar had a habit of lying.

“It was emphasised that what Myanmar said should not be believed,” he added.

“I am sad to see this day when Suu Kyi is defending a genocide case as I also demonstrated for her freedom because she was an icon of human rights,” Momen said.

Analysts said in some ways it was also a trial of Suu Kyi and her current stand on human rights as she led the Myanmarese delegation to defend charges of genocide at the trial, which  being closely monitored by the world community. The Gambia is seeking emergency measures to prevent further harm to the Rohingya, pending a wider case at the ICJ which could take years to come to a conclusion.

Justice Syed Refaat Ahmed explained that “if the ICJ orders emergency measures sought by Gambia then it will go to the UN Security Council for approval before any action is taken on the ground.” “This will, for the first the time also, will put the Security Council in dire straights as it cannot ignore its own ICJ,” he added.

“Myanmar in no way can challenge the jurisdiction of the ICJ as it has already tried to do because both were parties of 1948 Genocide Convention and ICJ is an UN organization,” he told the daily sun.

Justice Ahmed added that it was for the “first time Mynmar was cornered and by sending Suu Kyi it meant that it was going to fight the case substancially.”

“This is very much a dispute between Gambia and Myanmar,” Gambian Justice Minister Abubacarr Tambadou told the judges of the court, which was set up in 1946 to resolve disputes between UN member states.  “All that The Gambia asks is that you tell Myanmar to stop these senseless killings, to stop these acts of barbarity that continue to shock our collective conscience, to stop this genocide of its own people,” Tambadou was quoted as saying by news agencies.

A former prosecutor at the tribunal into the Rwanda’s 1994 genocide, said Myanmar’s military operation involved “mass murder, mass rape and mass torture, children being burned alive in their homes and places of worship.”

An attorney assisting Gambia against Myanmar said Thursday that he was confident that the West African nation would win the case based on copious, strong evidence of army atrocities against the Muslim Rohingyas.

The 74-year-old Suu Kyi, also her country’s foreign minister, was seen on TV quietly listening to the Gambian lawyers and taking notes, but did not speak to waiting reporters. The 1991 Nobel Peace Prize winner is expected to reiterate her government's claim that the military was targeting Rohingya militants and there was no case for genocide when she addresses the court on Wednesday.

ICJ judges have only once before ruled that genocide was committed, in the 1995 Srebrenica massacre in Bosnia.

Myanmar also faces a number of legal challenges over the fate of the Rohingya besides the one at the ICJ — a separate war crimes tribunal in The Hague — and a lawsuit in Argentina.

More than 700,000 Rohingyas fled to Bangladesh in August 2017 to escape a corched earth campaign launched by the Myanmar military in response to attacks on security posts by Rohingya militants in western Rakhine state.  A U.N. investigation concluded the campaign was carried out "with genocidal intent," based on interviews with survivors who gave numerous accounts of massacres, extrajudicial killings, gang rapes and the torching of entire villages.

The Rohingya were excluded from a 1982 citizenship law that bases full legal status through membership in a government-recognized indigenous group.