‘We need to peak at the right time’ 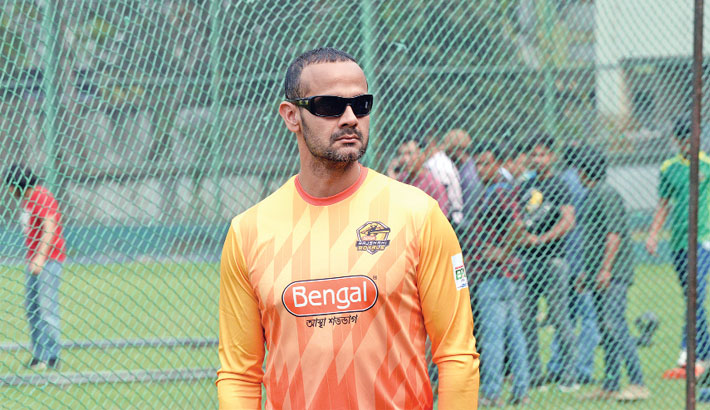 Rajshahi Royals coach Owais Shah said his side would leave no stone unturned to gain the momentum by playing well in the group phase and prepare them for the play-offs in the Bangbanadhu Bangladesh Premier League (BBPL).

“We have got 12 games each. After that, obviously into the semi-finals, playoffs, finals- so I think as long as we can get through the round-robin games and try and finish towards the top and then hopefully really turn the game on and try and pick into that semi-finals stages and obviously into the final,” Shah said during his side’s practice session at the academy ground in Mirpur  of the Sher-e-Bangla National Cricket Stadium on Monday.

According to the former English player, Rajshahi Royals have all the ingredients in the team to be successful at this level.

He said the main strength of the team lied in top order which consisted of the likes of explosive Afghanistan batsman Hazratullah Zazai and Bangladeshi Liton Das.

He also revealed that they have no lack of firepower in the middle and lower-middle order also which was formed with Ravi Bopara and Andre Russell, considered as the most explosive batsman in the T20 cricket.

“We have got good batters and all-rounders, which is I think key in T20 cricket. We have got some explosive batsmen in the top like Hazratullah Zazai, Liton Das and we also got a very good all-rounder in the team in Ravi Bopara, Andre Russel,” he revealed.

“So I feel like we have got a good balance of the squad but we have not played any games yet. We are going to see how the games come together. And hopefully, the plan is to get them together in next two-three days, and pick up us at the right time of the tournament also,” he said.

He disclosed that they are expecting to get all the players right from the start of the tournament.

“We should, in theory, get all the players from the beginning,” he said.

Owais Shah hoped that this year’s Bangabandhu Bangladesh Premier League (BBPL) would be a successful tourney and attract the crowd and kids into cricket to enrich the country’s cricket more.

But for this, he wants a wicket which could be advantageous for both the crowd and the players. If the wicket is good, the contest would be good to see, said Shah, the former English cricketer.

The wicket in BPL tournament in the past was heavily criticised for being slow and low and make the cricket boring because of the series of low scores. While it is not the case in the wicket in Chattogram and Sylhet, the Dhaka wicket were extremely low and produced low scoring affairs for which the fans time and again showed their anger and frustration.

But Shah this time expected that the wicket won’t be so and at the same time advocated for good wicket.

“I hope we can have exciting cricket, I hope T20 cricket in view, should all be about, generally it’s dominated by the batsmen, but it’s good to see something in it for the fast bowlers and little bit for the spinners,” Shah said.

“All-round good cricket will be good, but the aim of the game obviously entertains the crowd, make sure it’s a good product which the BPL is and it is sure the product keeps continue to attract the crowd and kids into cricket,” he concluded.