Thai massage could get UNESCO status 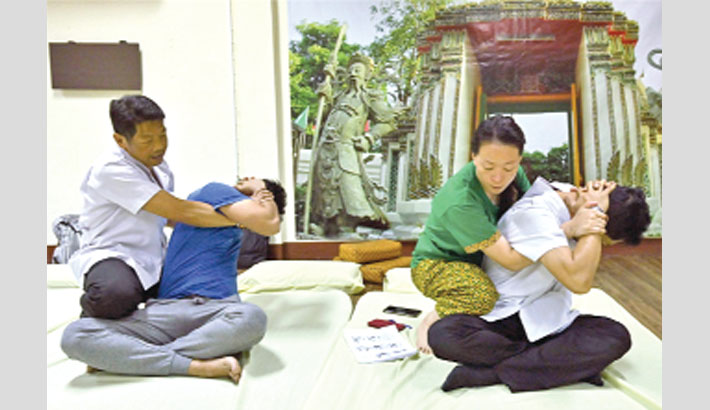 At Bangkok’s Reclining Buddha temple Krairath Chantrasri says he is a proud custodian of a 2,000-year-old skill - the body-folding, sharp-elbowed techniques of Thai massage, which this week could be added to UNESCO’s prestigious heritage list, reports AFP.

From upscale Bangkok spas and Phuket beach fronts to modest street-side shophouses, “nuad Thai”—or Thai massage—is ubiquitous across the kingdom, where an hour of the back-straightening discipline can cost as little as $5. This week it may be added to UNESCO’s list of “Intangible Cultural Heritage” when the body meets in the Colombian capital of Bogota (December 9-14).

Krairath, who teaches at the Reclining Buddha School inside the famed Wat Pho temple, helps thousands of Thai and foreign students who flock to the centre each year.

The son of a masseuse, he takes great pride in his role sharing the ancient discipline at a temple whose certification is a proud banner for any massage shop.

“I’m a continuation of our collective knowledge,” the 40-year-old told AFP.

Originating in India, doctors and monks were said to have brought these methods 2,500 years ago to Thailand, passing its secrets from master to disciple in temples and later within families.

Under Thailand’s King Rama III in the nineteenth century, scholars engraved their knowledge of the field onto the stones of Wat Pho.

But the practice really took off in 1962 thanks to the formation of the school, which has since trained more than 200,000 massage therapists who practice in 145 countries.

The school’s director Preeda Tangtrongchitr says they usually see an uptick of interest from Thais when the economy is bad.

“For many people who are disabled or in debt, this job is an opportunity because it requires no material—only their hands and knowledge,” he says.

Today a therapist at a top-end spa can charge around $100 an hour inside Thailand, two or three times more in London, New York or Hong Kong where the Thai massage brand is booming.

But the training is “demanding”, says Chilean Sari, a professional masseuse who travelled to Bangkok to learn the discipline.

“The technique is very precise, there are so many things to be aware of,” the 34-year-old told AFP, as she made rotations with her palm on a fellow student’s skull.

The teachings focus on directing blood circulation around problem areas to solve muscle aches—sometimes drawing winces from clients unaccustomed to the force applied.

Studies have shown it can help relieve back pain, headaches, insomnia and even anxiety.

For Matthieu Rochefolle, a nurse from Lyon, France, adding Thai massage techniques to his repertoire of skills could help his elderly patients aching for relief.

“It could also allow me to earn a little more,” he says.