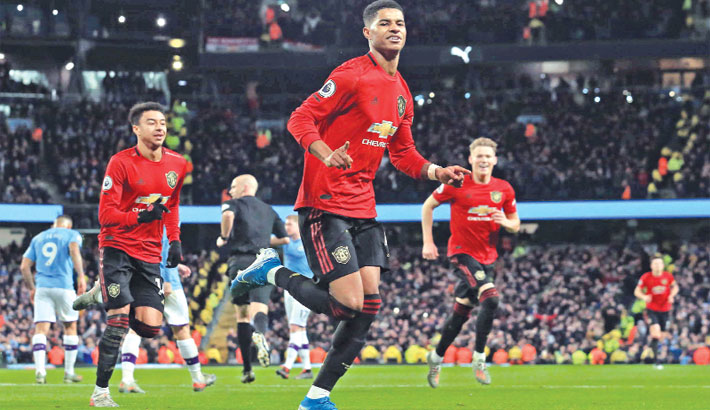 Defending champions City came into the match at the Etihad Stadium knowing they had to win after Jurgen Klopp’s men coasted to a 3-0 victory on England’s south coast but they succumbed to United’s lightning-quick attacks, losing 2-1.

City’s fourth league defeat of the season leaves them 14 points behind Liverpool, who have won 15 of their 16 league games. No side has ever gone on to win the title after being as many points behind the top side at the end of a day.

But the match was overshadowed by unsavoury incidents, with United midfielder Fred hit by objects thrown from the crowd and footage on social media appearing to show a City fan making monkey chants.

Ole Gunnar Solskjaer’s United started the evening match buoyed by their victory against Spurs in midweek and were immediately on the front foot, pouring forward at frightening pace.

Marcus Rashford opened the scoring from the penalty spot in the 23rd minute and Anthony Martial doubled the visitors’ lead six minutes later.

City came back strongly and eventually their pressure paid off, with Nicolas Otamendi’s late header sparking a frantic wave of City attacks but they failed to find an equaliser and United moved up to fifth in the table.

“We’ll remember this one. We look so dangerous when we get the ball and go forward against arguably the best team in the world,” Solskjaer told the BBC.

“They are an unbelievable team and to get a result and defend like we did and create as many chances... we should have been three or four up but for some good goalkeeping.”