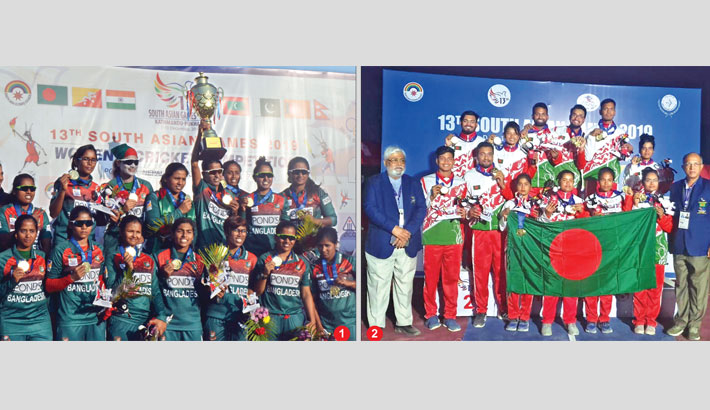 Bangladesh fencers showed their skills at thirteenth South Asian Games at Kathmandu and Pokhara in Nepal on Sunday.

While in men’s Team Epee final, Das, Imtiaj, Mondal and Rahim brought in silver for Bangladesh but the women in red and green earned bronze in their Team Women’s Foil event with Khatun, Mou, Sanjida and Shopna wielding the swords.

Bangladesh Women’s Handball Team were also phenomenal on the day in their third place decider match as they thrashed Pakistan by 31-15 points to claim bronze medal at Pokhara Covered Hall in Pokhara on the day.

But their male compatriots could not replicate their success as they fell to Sri Lanka by 26-33 points in their bronze-medal deciding match at the same venue.

In shooting, Bangladesh continued their silver-run by clinching the second spot in the ten-metre Air pistol final event. They succumbed to India on the final.

Bangladesh also won bronze in weightlifting with Mohammad Abdullah Al Mumin lifting 267 kilograms with 147 kilograms in the clean and jerk and 120 kilograms in snatch in the under-109 kilograms event.

Meanwhile, Bangladesh’s dream for gold in football came to a heartbreaking end with Bangladesh Under-23 National Football Team being edged past by Nepal by 0-1 goals in the virtual semi-final at APF Ground in Kathamandu in Nepal.  Nepal took the lead on the 11th minute of the match due to a lapse in Bangladesh defence with their number 9 sending in an airborne pass from the right wing into the nets. Nepal held on to that lead till the last minute of the game to confirm their final berth.

Mohammad Farhad won silver in the men’s single event, where he scored 282 to come second. Nepal won both the gold and the bronze with a score of 274 and 284 respectively.

In the women’s single event, Zakia Sultana won the silver with a score of 317 whereas Sri Lanka won both the gold and the bronze.