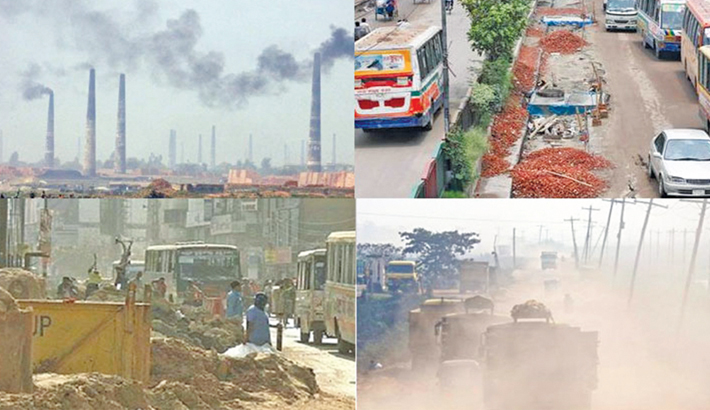 Recently, Dhaka city was ranked number one polluted city in a survey conducted by the Air Visual, a US based air quality monitoring agency. Dhaka city air quality degradation has reached highest level ever among its peer countries. Earlier Dhaka city occupied third position among the big cities such as Delhi and Ulaanbaatar. Dhaka city’s air is full of dust, smog and impurities due to the ever-increasing vehicles, construction of infrastructures and brick kilns, etc., in and around Dhaka city such as Narayanganj, Gazipur, Cumilla, etc. These are emitting carbon dioxide, smog and various chemicals in the air. As such, Dhaka city populace has been in the threatening position.

Car and busses are increasing in the Dhaka city in large numbers, burning fuel and producing carbon dioxide and smog, which are mixing in the air and making the air polluted. Due to the trend of urbanization, people are erecting high-rise buildings. The business of bricks is rising manifold and so are the brick kilns increasing. The brick kilns are producing smog as most of the brick kilns are not eco-friendly and run illegally on traditional methods, i.e. burning woods.

Construction of various infrastructures, building and commercial spaces are adding dust to the Dhaka city air. Unplanned construction of infrastructures and apartments and lack of coordination among the government departments are responsible for the dust in Dhaka city. Moreover, cutting of trees in the name of development activities due to lack of awareness are some of the reasons behind the degradation of air quality of Dhaka. The stakeholders of the City, the citizens, the two City Corporations, Rajuk, WASA, law enforcement agencies, environmental activists and other organizations have to work together to improve the air quality. Tough actions must be taken against the brick kiln owners, vehicles owners who are running unfit bus and cars and developers who are building by littering construction materials in inappropriate places like walkways and footpaths. Last but not least, the concerned authorities should announce war against those who are responsible for polluting the air of Dhaka city. The sooner the action is taken against the culprits, the better for the dwellers of the Dhaka City.