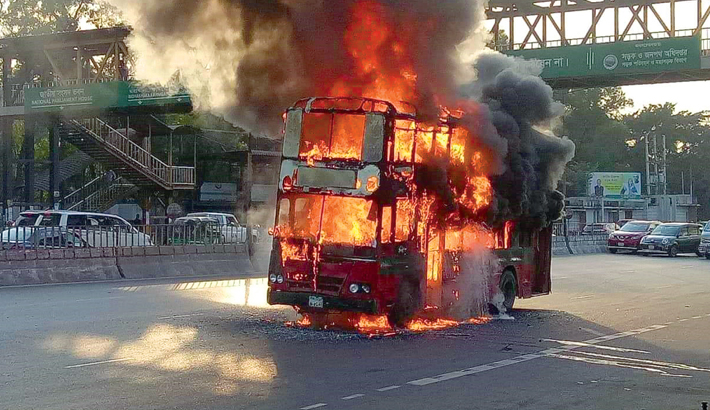 A double-decker bus of the Bangladesh Roads and Transport Corporation (BRTC) catches fire in front of Kurmitola General Hospital in the capital on Saturday. —SUN photo

Two buses including a state-owned BRTC double-decker bus caught fire at Karwan Bazar and Kurmitola areas in the capital on Saturday.

Sohag Mahmud, an operator at Fire Service Civil Defence headquarters, said a bus of Trust Service Limited caught fire suddenly in Karwan Bazar at around 2.45pm while the bus was on the way to Shahbagh.

Besides, a double-decker bus of Bangladesh Road Transport Corporation (BRTC) caught fire on Airport road near Kurmitola Hospital at around 4.00pm.

On information, separate teams of fire service doused the blaze of the two buses, said the fire service operator.

Passengers got off the buses immediately after the fires broke out. Both the incidents occurred as a result of mechanical defects in the vehicles, police said.

However, there were no reports of any casualty.