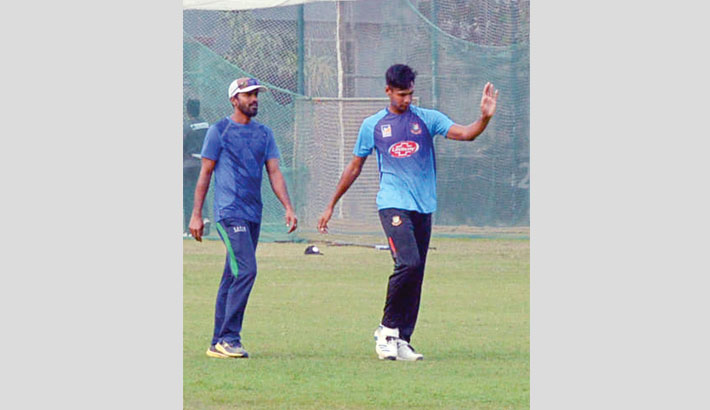 Rangpur Ranger pacer Mustafizur Rahman is seen during a practice session at BCB academy ground in the capital on Saturday. - BCB Photo

Bangladesh’s pace bowler Mustafizur Rahman is trying to get back his lethal yorker in the upcoming Bangabandhu Bangladesh Premier League.

After ICC World Cup 2019, Tigers’ pace prodigy Mustafizur was trying to find his old form back but failed to impress on different occasions as injury was an obstacle that was keeping him from being his best.

But as ICC Twenty20 World Cup 2020 is approaching thick and fast, Mustafiz seems determined to regain his game-changing yorking abilities and with that aspiration, Mustafiz practiced with bottles this time.

On Saturday, at Bangladesh Cricket Board academy field of Sher-e-Bangla National Cricket Stadium, the Rangpur Ranger pacer Mustafiz was seen practicing yorkers, setting bottles at the bottom of the stumps while another Rangpur fast bowler Taskin Ahmed was also seen practicing along with Fizz.

Both the national team fast bowlers were accompanied by Rangpur’s bowling coach and their assistant coach Mijanur Rahman Babul during the session.

Mustafizur was also seen working hard to increase his pace as he was seen breaking the sticks couple of times during the practice. The pacer broke the stump even on his last delivery in the practice session at the academy. The-24-year-old pace bowler took 12 wickets in the last edition of BPL for Rajshahi.

Babul, who also worked with Mustafizur at Rajshahi Kings during the last season, closely inspected the pacer during his spell.

Rangpur assistant coach Babul is hopeful that Mustafizur can perform well in this edition of BPL too.

“The way he performed in the last season, I hope he will perform the same way this time. Mustafiz will be in his comfort zone this time. As he starts to enjoy bowling, he will return in his rhythm,” said Mizanur.

BCB officials said on Friday that they have allowed Mustafizur Rahman to put up his name in IPL auction in order to regain form as they are concerned with his prolonged lean patch.

Mustafizur’s performance in the recently-concluded three-match T20I series against India was another occasion when he fell short of expectations, looking a shadow of the bowler who made his debut in 2015 and could win games for Bangladesh single-handedly.

Mustafizur ended the three-match series without any wicket, giving away 92 runs from 9.4 overs with an economy rate of 9.51 while team management decided not to pick him up in the following two-match Test series.

While BCB is concerned with his fitness, according BCB Cricket Operation’s Committee Chairman Akram Khan, they are confident that if Mustafiz can properly manage his injury, he will be able to play with minimal chances of getting injured as he has been doing for quite some time now.

Earlier, BCB in July 2018 announced that Mustafizur will be stopped from taking part in franchise based cricket league as they felt that he was picking up injury in those tournaments and as a result could not fulfill his responsibility for Tigers.

However, BCB removed the bar from the left-arm pace bowler as they feel he is now more capable of managing his injury and more importantly BCB is hoping to see him regain his form by playing in the cash rich tournament, if picked.