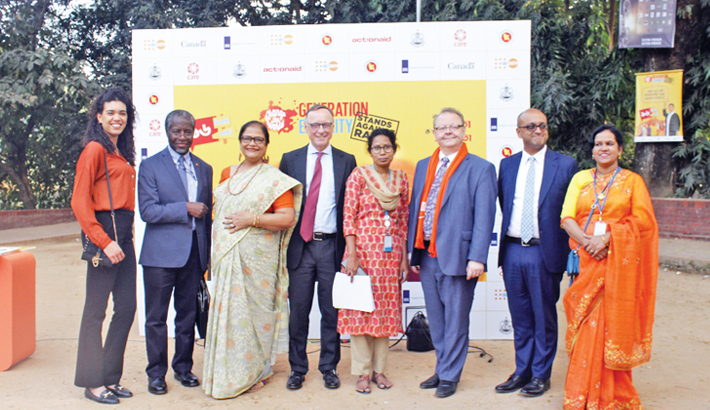 Guests pose for a photograph at a programme held in the capital’s Dhanmondi Rabindra Sarobar recently in observance of the ‘16 Days of Activism against Gender-based Violence’. - SUN photo

Speakers at a programme call for raising awareness among the mass people to take stand against any forms of gender-based violence including rape and sexual harassment.

They also stressed to bring policy makers and media under the same umbrella which will be impacted on policy or legislative change and raise generations’ voice to prevent gender-based violence.

Among others, HE Harry Verweij, Ambassador, Embassy of the Kingdom of the Netherlands and Benoit Préfontaine, Ambassador, Canadian Embassy, also joined the event.

The two and half hour long event ended with vote of thanks by Shamima Pervin, Chief-Gender Unit of United Nations Population Fund (UNFPA).

More than thousands of mass people joined and showed their solidarity with the cause.

The event was organised aligning with the both international and national theme of the campaign which are ‘Orange the world: Generation Equality Stands against Rape’ and ‘Ensuring equality between men and women, can prevent violence’ respectively.