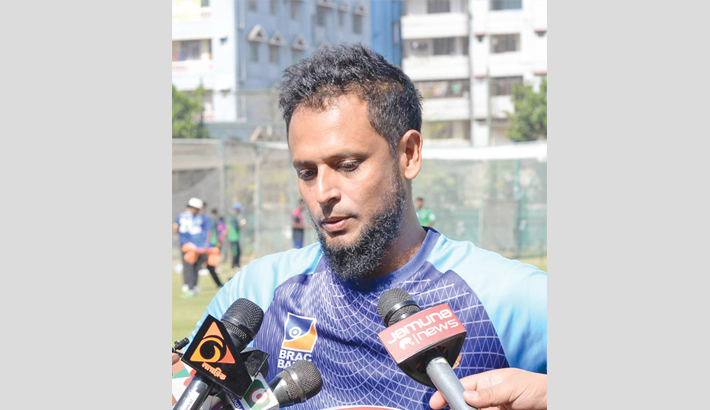 Bangladesh’s left-arm spinner Arafat Sunny said on Friday that he is not losing his sleep over cementing his spot in the national team as he is rather focusing totally in the upcoming Bangabandhu Bangladesh Premier League (BBPL).

Sunny, who was included in Tigers’ squad for the recently concluded series in India, said, despite finding himself benched throughout the series, he is optimistic that if he can perform in BBPL then he can have the opportunity to break through in the national set-up in the coming days.

“My main focus is BPL. I plan to focus match by match so that I can give my best,” Rangpur Rangers spinner Sunny told reporters at BCB Academy premises on Friday.

“I have returned to the national side after so many years and if I can do well in BPL than we have a series against Pakistan which might be bring the call for me,” he said.

“For now, I am not thinking about ICC Twenty20 World Cup or the home series. Now my full concentration is in BPL,” he said adding he is not disappointed not to get any opportunity during the India tour as he feels that it at least showed that he is under the radars of the national selectors.

“I could not play in India series. But I was definitely part of the plan there,” he said.

With National team appointing Daniel Vettori as their spin coach, it is expected that the spinners are making notes in shaping their bowling skill from the instructions of the Kiwi’s vast experience in spin bowling.

Sunny also lauded Vettori as he mentioned that Vettori’s experience, bowling in T20 format, especially in Indian Premier League (IPL) would help them in the upcoming BPL.

“There are so much to learn from him (Vettori), how to bowl in T20 cricket as he played for a long time, in IPL. I have worked on my skills and there are a lot of opportunities coming ahead. We are heading forward with a certain planning,” said Sunny.

Sunny though said that there is no specific plan in regards to the team as there are still a couple of days left before BPL. But admitted that he has started his preparation with his plann for the tournament.

“I will have my own planning. I just started. Practiced for three days. There are still some time,” Sunny told.

“We have just started practicing. Plans will be formulated in due time, I will talk to the coach. I will talk with him individually also. There will definitely be some planning done before the matches. Now I am pacing ahead with the individual planning,” he told.

Compared to the previous editions of BPL, the BBPL has been pointed fingers at for a lack of cricket biggies as most teams have not been able to rope in enough high profile cricketers.

But Rangpur spinner does not agree with the idea that his team are a weak one and considers his team as one of the best T20 squads in the tournament.

“To me, my team seems to be the best. We have good T20 players in our team. For example Mohammad Nabi, Naim Sheikh, Nadif Chowdhury, Omi (Jahurul Islam)- I think this is a very good team. T20 is such a format, where there’s no good or bad team. Who will play well on the day, will win,” told Sunny.