Locals must step up, says Nixon 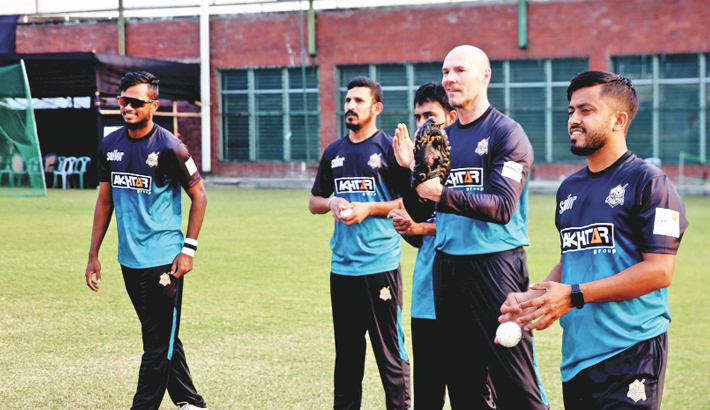 Chattogram Challengers players are seen during a training session at BCB Academy playground of the Sher-e-Bangla National Cricket Stadium in Mirpur in the capital on Friday. – BCB Photo

The Englishman is the first foreign coach to arrive in Bangladesh for the tournament that is scheduled to start from December 11.

Nixon had a busy day at office as he was seen working extensively with his charges who were available in the practice session.

The former English wicket keeper batsman looked energised as he was running all around the field during his two-hour long practice session at BCB Academy premises in the evening.

“It’s wonderful. The energy the guys have got and the spirit we have already created with a small group is great. We have got some good players. I am very impressed with the players they have taken in the mix,” said Nixon.

“They have match specific ideas, which is very important. We have got some very good players, I am really excited,” Nixon told reporters.

“Every game is a challenge. At this top level of cricket, the margin for error is very small. Who does the basics well under pressure and has momentum will win the games. I was just speaking to the group after I arrived. It’s important that our local players believe that they are match winners. They have got to get a hold of the games and be the guys,” he said.

“This is a wonderful opportunity for them to do well. They know the ground, they know the pitches as well. I think it’s going to be harder for the big names coming in. They are the work horses that can actually win games for us. It’s really important. They have got to believe that. The way I have seen them play today I am very excited,” he said.

Nixon added that their goal is to win the tournament and in order to do that they need to progress on day to day basis.

“We have got to win it. You want to win, of course you always want to win. That’s why we turned up, that’s why we get up from beds in the morning. We will progress day by day in our skills and in our ideas and we are open to new ideas, we are being smart. Twenty20 cricket is about being smart,” he said.

Nixon added that he is not very nervous despite it being his maiden campaign in Bangladesh as he feels that he is well aware of his strength and weakness courtesy of statistical data.

“I think people know their games to a deeper level nowadays. The way coaching is. I think the knowledge about the game is more comprehensive now. The amount of analysis done here is just incredible. Every game is scrutinised. The coaching staff have got every statistic out there,” said Nixon.

“Everybody knows each other so well. Batters are way more positive than they used to be. They have all got their reverse sweeps, slog sweeps, ramps and what not. Everybody has got everything now. It’s a tough game for bowlers. They are forced to bowl more and more cutters and slowers. You have to be flexible; your plans have got to be fluent. It’s about having the right squad that can achieve that,” he said.

Nixon added that he has fond memories of playing against Bangladesh in ICC World Cup 2007 in West Indies.

“I do remember that game. It was in Barbados. Actually it was a huge wicket. I remember Shakib and the spinners bowling beautifully. It was a tight game. It was me and Paul Collingwood out there at the end. Luckily we saw us through. Rest of the guys did a good job. Bangladesh always look ready for a fight. They always fight like Tigers. It’s wonderful. I came here many years ago with the MCC before Bangladesh got Test status to see if it was worth MCC’s investment and helping Bangladesh cricket with facilities and coaches etc. It was the best thing they ever did. Bangladesh is a proud cricketing nation. It is also great for us to come and learn as well. In England it doesn’t turn as much as it does over here. It doesn’t hold as much. So, variation is going to be very important in our bowling,” Nixon concluded.