A silver-laden day for Bangladesh 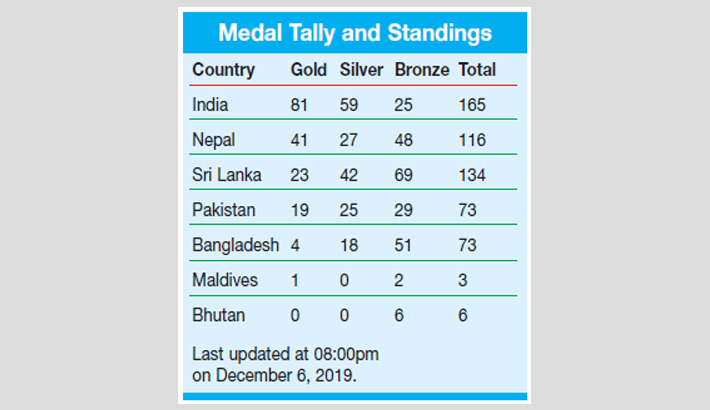 Bangladesh had yet another mediocre day filled with silver medals at 13th South Asian Games at Kathmandu and Pokhara in Nepal on Friday.

Mohammad Farhad won silver in the men's single event, where he scored 282 to come second. Nepal won both the gold and the bronze with a score of 274 and 284 respectively.

In the women's single event, Zakia Sultana won the silver with a score of 317 whereas Sri Lanka won both the gold and the bronze.

It was the brave girls of Bengal who shone for Bangladesh by bagging silver medals on the day.

The other silver medal came from weightlifting event as Rokeya Sultana Sathi took to the second step of the podium in the under-71 kgs women’s event.

The women's team event also brought silver as the Bangladesh team of Zakia Sultana, Nasima Akter and Sonia Akter ended up on a score of 639. Sri Lanka won the gold in this discipline whereas Nepal won the bronze.

Meanwhile, Bangladesh Women’s Kabaddi Team won bronze in their event as they edged past Sri Lanka by 17-16 points. Nepal and India will fight it out for the gold on the final of the meet. 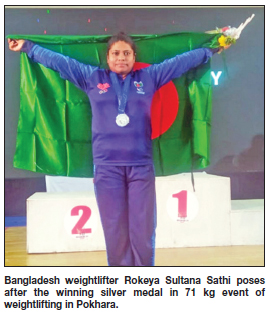 Mohammad Tamimul Islam came fourth in the round with 333 points while Mohammad Hakim Ahmed Rubel lagged behind at fifth with 326 points.

Female archers held their reign at compound women’s singles event with all four spots belonging to Bangladeshi archers. Susmita Banik held the top spot with 340 points, Suma Biswas is breathing on her neck with 338 points. Shamoli Ray came third with 334 points while Bonna Aktar was the fourth spot courtesy of 335 points on the day.

Bangladesh Women’s Handball Team had a great outing on the day as they thrashed Sri Lanka by 34-13 points in their match at Pokhara Covered Hall in Pokhara.

Bangladesh players completely dominated the proceeding from the start of the play and maintained their momentum till the very end, resulting in the emphatic win.

Meanwhile, bad news awaited at Basketball as Bangladesh Men’s Basketball team were heartbroken as they suffered a narrow defeat of just a point at the hands of Maldives. Maldives took the match with 31-30 points at the covered hall of Tripureshwor.