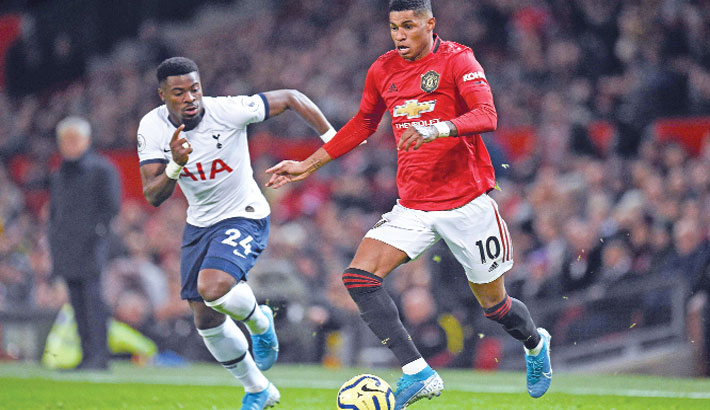 Jose Mourinho endured an unhappy return to Manchester United as Marcus Rashford struck twice in a 2-1 defeat for Tottenham while Liverpool maintained their eight-point lead at the top of the Premier League, putting five goals past Everton.

Second-placed Leicester equalled their top-flight league record of seven consecutive wins with a 2-0 victory against bottom side Watford.

Mourinho’s first loss since taking charge of Spurs eases the pressure on Ole Gunnar Solskjaer as United moved above Tottenham, up to sixth in the table.

Rashford smashed United into an early lead with the help of some poor goalkeeping by Paulo Gazzaniga, the England international’s powerful shot creeping in at the near post and he had chances to extend the lead.

Yet for all United’s dominance in the first 45 minutes, one moment of brilliance from Dele Alli pulled Mourinho’s men level before the break.

Alli slotted his fourth goal in as many games since Mourinho took charge.

United were handed the chance to retake the lead when Rashford went down under Moussa Sissoko’s challenge in the penalty area early in the second half and he put his recent spot-kick woes behind him to send Gazzaniga the wrong way.