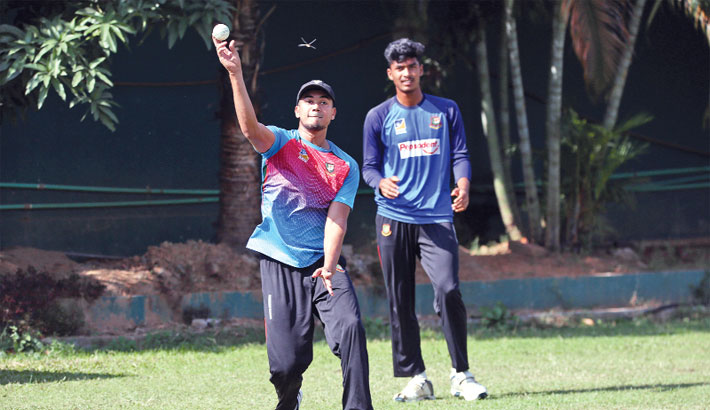 Rangpur Rangers pacer Taskin Ahmed bowls during a training session at BCB Academy playground of the Sher-e-Bangla National Cricket Stadium in Mirpur in the capital on Thursday. —BCB Photo

Bangladesh pace bowler Taskin Ahmed said on Thursday that he is better prepared ahead of the Bangabandhu Bangladesh Premier League (BBPL) as he is confident about his injury management.

Injury had been a constant feature in Taskin’s career and the right arm pace bowler said that he is eyeing to make a comeback in the national set-up by performing well in BBPL.

Taskin picked up 22 wickets for Sylhet Sixers in 12 innings in BPL 6 and was looking set to return back to the national team but an injury in the last game forced him to be ruled out from the series against New Zealand despite earning a call-up.

Taskin said that his target is to complete the tournament remaining injury-free, considering the fact that he got injured in the last BPL after performing magnificently.

Despite returning into the national side later he couldn’t prove his worth and was axed. Now the right arm pace bowler is eyeing to cement his place in the national dressing room as he is confident that he is well equipped to deal with the injury and perform as per the expectation.

“My injury management is now better than ever. Now, I understand my body and know what I should do to keep it injury-free. Still injury is a part and parcel of a players’ career and the pacers are more vulnerable to it. So, I will try to take a good preparation to keep me in better stead in BPL,” Taskin told reporters after practice session at National Academy Ground in Mirpur on Thursday.