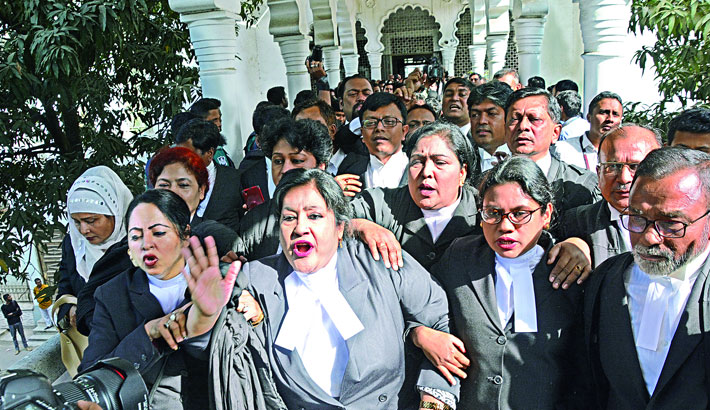 Pro-BNP lawyers chant slogans on the Supreme Court premises in the capital on Thursday after the court deferred the hearing on BNP chairperson Khaleda Zia’s bail appeal in a corruption case. They earlier shouted and made chaos in the courtroom during the hearing of her bail petition. — sun photo

“Unprecedented chaos” by pro-opposition lawyers forced the Chief Justice to quit the court room during a hearing on Khaleda Zia’s bail plea soon after he deferred the proceedings till December 12.

The pro-BNP lawyers were involved in a similar incident in 2010 during the hearing of Khaleda’s appeal against the High Court order that asked her to vacate the house where she was staying illegally in Dhaka Cantonment.

its allies in the court room.

On Thursday, the incident took place during the hearing of an appeal filed by Khaleda Zia challenging the High Court order that rejected her bail in Zia charitable graft case. A lower court had earlier sentenced her to seven years imprisonment in the case.

Chaos by pro-BNP lawyers action forced Chief Justice Syed Mahmud Hossain and five other judges to leave the courtroom 14 minutes after conducting the judicial proceedings at 10:00am.

Pro-BNP lawyers became unruly as the court announced the adjournment of hearing till receiving Khaleda’s health report which was to be submitted by Bangabandhu Sheikh Mujib Medical University (BSMMU) authorities as per an earlier order.

Earlier, on November 28, the Supreme Court asked the BSMMU authorities to submit a report on Khaleda’s health condition before the court by December 5.

As BSMMU failed to submit the report by Thursday, Attorney General Mahabubey Alam prayed to the court to adjourn hearing till receiving the report. The pro-BNP lawyers were infuriated with the adjournment plea.

During the chaos, the pro-BNP lawyers were shouting “shame, shame” at the judges They vowed not to leave the courtroom until the Supreme Court hears the appeal filed by Khaleda Zia and grant her bail. Lawyers were inside the courtroom and gave slogans till 1:15pm.

Before leaving the courtroom, the judges ordered BSMMU) to submit report describing health condition by December 11 as she seeks bail on medical ground. Hearing on the bail appeal will be heard the following day (December 12).

As the pro-BNP lawyers again sought to raise the issue of Khaleda’s bail, the chief justice intervened and said, “We won’t listen to anything else right now. There should be a limit to everything. This is unprecedented. I’ve never seen such a situation in court before.”

Talking to reporters, Attorney General said “The BNP lawyers have brought their movement into the court and created chaos. At one point, the court had to be adjourned due to the disorder they caused. They did not allow the court follow its schedule.”

The pro-BNP lawyers caused the disorder in order to exert ‘undue pressure on the court, he opined.

“The commotion they created was unprecedented, unimaginable. I have never seen it before. Their unruly behaviour amounts to contempt of court. It is similar to what we see in a public rally,” he added.

Aminuddin alleged that many of the protesters were not lawyers at all and requested the Chief Justice to take steps to ensure that they were not allowed into the court room.

“Many of them wore black coats but in reality, they were outsiders. No lawyer can chant such slogans. They did not respect the court and committed contempt of the Supreme Court. I strongly condemn their defiant act. I believe they will face stern legal action,” he said.

BNP chairperson, who is facing over 30 cases for corruption and criminal charges, is in jail since February 8 last year following her conviction in Zia orphanage trust graft case. Later, she was sentenced to seven years’ jail in Zia charitable trust corruption case also. The High Court hiked Khaleda’s jail term from five to 10 years in Zia orphanage case following a state appeal.