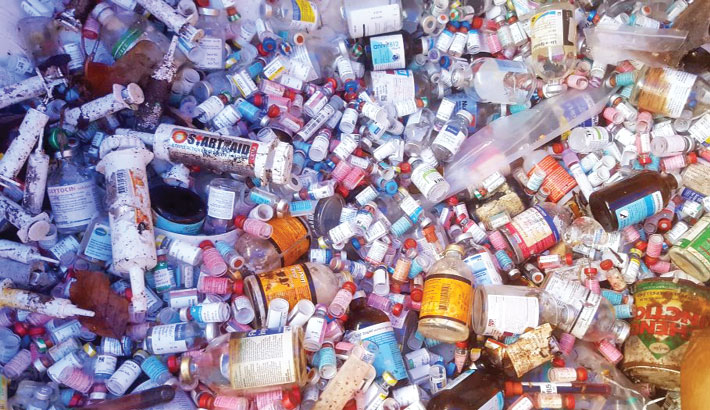 Last week, I went to National Institute of Traumatology and Orthopedic Rehabilitation (NITOR) located at Shyamoli in the capital. While I was crossing the road adjacent to the hospital, I saw an awful sight --- human organs cut off from the body during surgery were thrown away into an uncovered garbage container along with other medical wastes such as dressing equipments, syringes, bandages, saline bags and other disposed materials. Flies were buzzing around the medical waste. I was so irritated by the sight and the smell that I could not stand there for more than a while. People including patients and children were passing by the spot putting clothes or hand over their faces. I was shocked thinking that how the concerned authorities allow this sort of activities --- keeping used medical 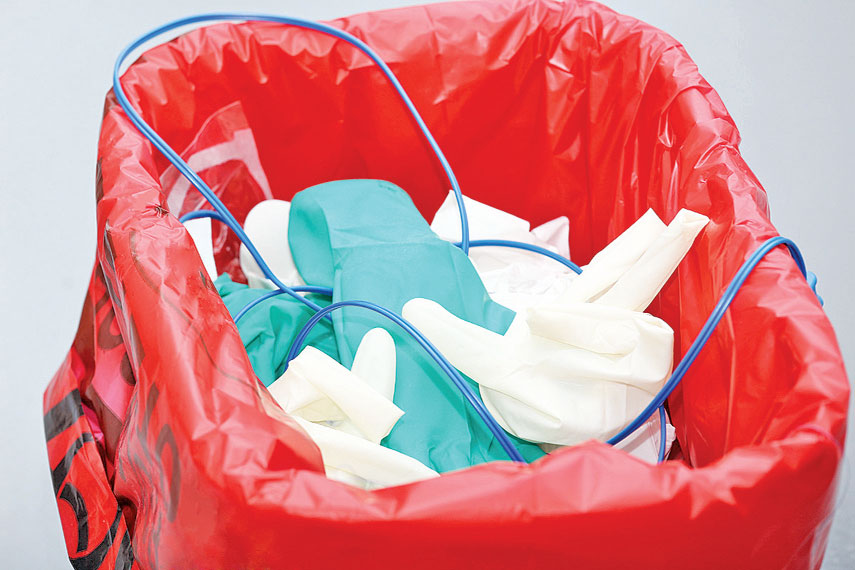 waste and human organs exposed for hours without considering the hazardous consequences on public health and environment. But the unfortunate truth is that the condition of waste management system is, more or less, similar in most of the government-run hospitals in our country. The most common practice is that hospital staff throws away the waste in certain places, which most of the time remain open until garbage trucks from city corporations collect it and dump it in the allocated landfills. If the waste management system of the state-run hospitals in the capital is so miserable, then we can easily imagine the woeful scenario prevailing in the government-run hospitals located outside this megacity. Ultimately this improper waste disposal method is creating serious health and environment threats for us.

Over the years medical waste generation rate, with the rapid growth of health care centers, has been increasing significantly. According to the latest statistics by DG of Health Service, Health Bulletin, published in 2017, 607 government hospitals and 5023 non-government hospitals and clinics were in operation to provide health care across the country. To improve the health-care service, the number of medical establishments is increasing rapidly, resulting in increased medical waste production rate. At present, it is estimated that daily about 0.8 to 2.45 kg medical waste is produced from each bed.

These medical wastes increase the risk factor for the common people. Usually hospital wastes are considered as the most complex waste. World Health Organisation (WHO) defines health-care wastes as disposed medical junk from the medical institutions, laboratories, and research centers. These wastes are classified into two different parts: hazardous and non-hazardous. Of the total generated medical wastes, 80-85% of wastes are considered as general or non-hazardous waste. The rest of the wastes that include infectious pathological equipments, various types of chemicals, decomposed human organs and genotoxics are regarded as hazardous wastes. Dumping the hazardous medical waste in the open air can directly affect patients, health care workers, waste handlers and common people. It is worth mentioning that WHO has recorded that contaminated syringes are affecting 21 million people with hepatitis B, 2 million people with hepatitis C and 260,000 people with HIV infection every year around the world.

Well, there are some reasons behind such poor waste management system. One of the major reasons is the lack of proper training and awareness of the people related to health care services. Owing to the unawareness, medical staffs dump the wastes in the nearby 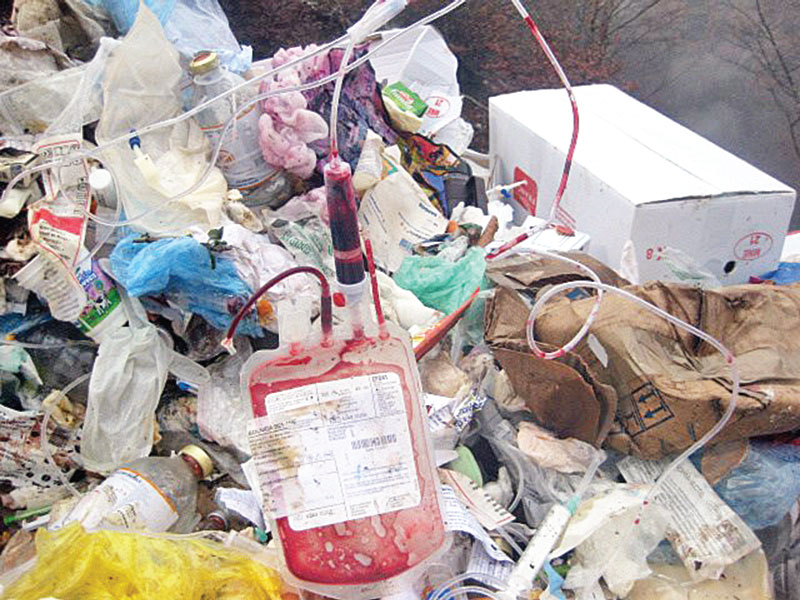 garbage heap or dustbin. Thus infectious medical wastes mix up with other wastes. This practice has been continuing for many years. But, with a view to improving medical waste management system and creating awareness regarding the issue among the medical professionals, Ministry of Health and Family Welfare (MOHFW) inaugurated a training program in 2005. More than 12 years later, a study was conducted in a government hospital and seven private diagnostic centers of Ishwarganj Upazila in Mymensingh district in 2018 to evaluate the condition of the medical waste management training program. In that study it was found that only 35 percent, of total 78 respondents, staffs were trained on the sustainable waste management system and the rest has no idea regarding it, and most of them are still practicing the old process for disposing of medical wastes.

Apart from consciousness, some other factors are to be blamed as well for this messy and dangerous situation. Absence of proper waste disposal practice chart, lack of accountability and inadequate research opportunity are other factors that hamper effective medical waste management strategy implementation. For instance, medical waste segregation procedure is followed worldwide. There is a chart which is followed worldwide where it is indicated that infected plastics such as used syringes, gloves, and other plastic wastes should be dumped in a separate bin which is secured for land filling. Similarly, there should be another bin where unclean, anatomical, chemical liquids, laboratory waste and expired discarded medicines should be dumped for deep burial in lands. Sharp materials should be dumped in the sharp pit to avoid further use and bin glassware materials except Cyptotoxic can be dumped in the recycler. However, in Bangladesh, the scenario is completely different. Unfortunately the concerned authorities are turning a blind eye to this issue. 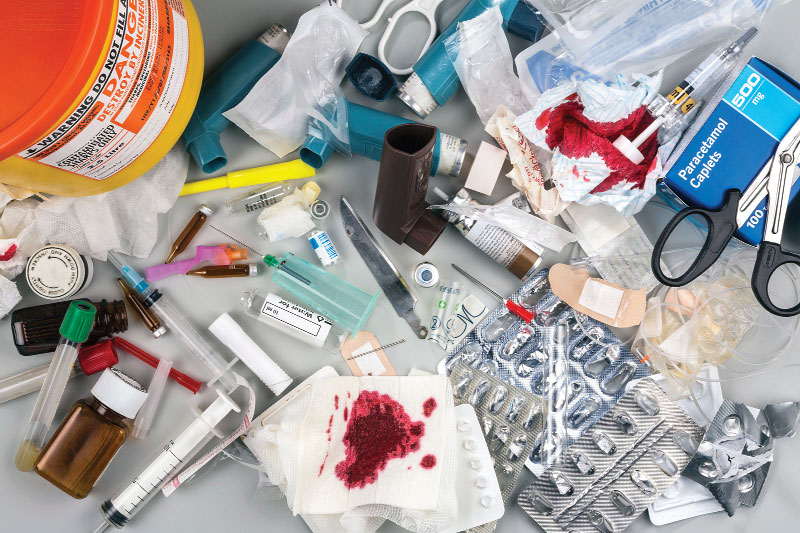 It is mentionable that after dumping the medical wastes properly it needs to be destroyed completely or buried in the landfill to ensure that those materials are never used again. But, a group of greedy rogues collect some wastes such as syringes, saline bags and other materials to re-sell those in the market. People are buying those products from the frauds and after using those equipments, they eventually suffer from other diseases. In the meantime, PRISM, a non-government foundation, is functioning in Bangladesh to successfully manage medical waste. They collect those disposed medical equipments, assort those manually and then reproduce things from some of those used materials. But, medical experts have opposed their procedure as only recyclable wastes, according to them, are eligible for reproduction but the contaminated waste needs to be deep-buried under the soil so that it does not harm the surrounding environment as well as people.

Experts working in this sector believe that medical wastes should be managed properly in order to avoid any unexpected health hazard. Concerned authorities must take some effective steps to ensure sustainable medical waste management system.