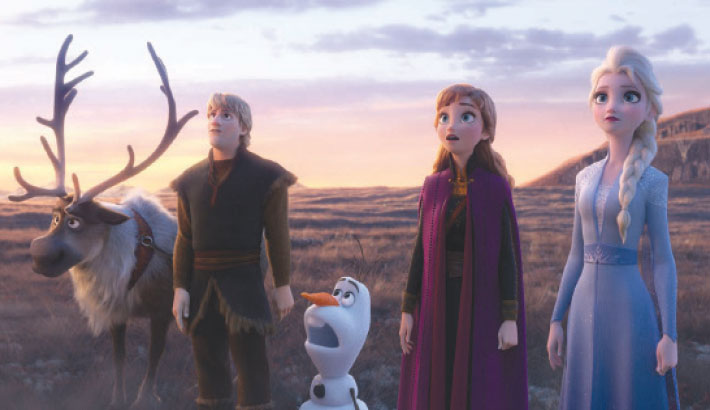 The sequel to Disney’s Oscar-winning box-office smash follows the further adventures of sisters Anna (Kristen Bell) and Elsa (Idina Menzel). ‘Frozen 2’ has everything you would expect such as catchy new songs, more time with easy-to-like characters, striking backdrops, cute little jokes, a voyage of discovery plot and female empowerment galore.

When you’ve made an original film that became the highest-grossing animated movie of all time with a $1.27 billion worldwide haul, with income from an ongoing stage version and myriads of merchandising sources as gravy, any temptation to mess with success would be deep-sixed in an instant. So, yes, Disney has been careful, cautious, conscientious and committed to continuing the franchise with the utmost fidelity to the original, resulting in a sequel that can’t miss with its massive constituency and will make another mint, but at the same time can’t help but feel predictable, safe and beholden to formulaic rules.

As in the first outing six years ago (but just three years later in terms of the narrative), Queen Elsa (voiced by Idina Menzel) remains an intriguing and rather more serious young woman who seems intent upon understanding her abilities and heritage. Domestic jibber-jabber among the royal family of Arendelle dominates the early-going in a rather let’s-get-reacquainted manner, and this is something at which Elsa’s chatty younger sister Anna (Kristen Bell) particularly excels. During this domestic first act set at the castle, a new song is introduced every few minutes, and there’s nothing wrong with that; as before, Kristen Anderson-Lopez and Robert Lopez have turned out a host of snappy, catchy tunes, at least two or three of which seem very likely to become favorites.

Before long, however, a devastating storm serves to get everyone out of the house and a select few into an enchanted forest, from which Elsa feels like she’s ‘being called.’ But while the troops gather to figure out what to do, some of the same crew from the previous film are given a few moments apiece to reintroduce themselves with their basic shtick, most notably including comic relief snowman Olaf (Josh Gad), who can be amusing in small doses, and Anna’s oafish beau Kristoff (Jonathan Groff), who, sadly, has become no brighter in the intervening years.

Although the movie to this point can hardly be called dynamic, Elsa’s almost mystical belief in a strange and unknown destiny begins refocusing the narrative once she sets out on her quest of self-discovery. She’s no innocent Dorothy looking for a way back home through a scary forest, although the journey has its emphatic perils. Rather, Elsa is a seeker and seer of a potentially high order, a woman determined to learn the truth about the world she inhabits and rules, whatever the risks and cost. This is what makes Elsa stand out among the crowd of commoners and sets her increasingly apart from the motlier crowd accompanying her on her journey to hitherto unimagined places.

Without missing a beat, ‘Frozen 2’ at this point could have easily become a tale of a dead-serious journey, a kind of cartoon with awful weather and dangerous creatures. Visually, too, some of the effects point in the direction of a head trip. But, indeed and alas, that’s a different movie. The journey we get is an equivocation, one that seems momentarily tempted by destinations perhaps not on the map but understandably travels on another, much safer road.

So while it flirts with the dark side, where the movie actually goes are the destinations of colorful and undisturbing sensation and constantly reassuring humor. There’s nothing wrong with that in terms of the massive, all-inclusive audience Disney is aiming for, and no one wants to scare the 4-year-olds too much.

Certainly the overriding intent of Jennifer Lee’s script is to position Elsa as a serious role model for girls and young women, a resilient, can-do, nothing-can-stop-me character able to overcome any challenge in her path. This she most certainly does, and a raft of co-story writers has joined in to try to stir the ingredients to the desired balance among drama, excitement, comedy, suspense, action and inspiration.

Unfortunately, if you stop to notice, you can readily sense the efforts of the many cooks in the kitchen, recommending a bit more sugar here, a pinch of spice over there, bake this a little longer and put some extra frosting on just for good measure. The recipe is a good one, but you can feel all the fuss that went into it.