BTRC to seal loopholes in guideline 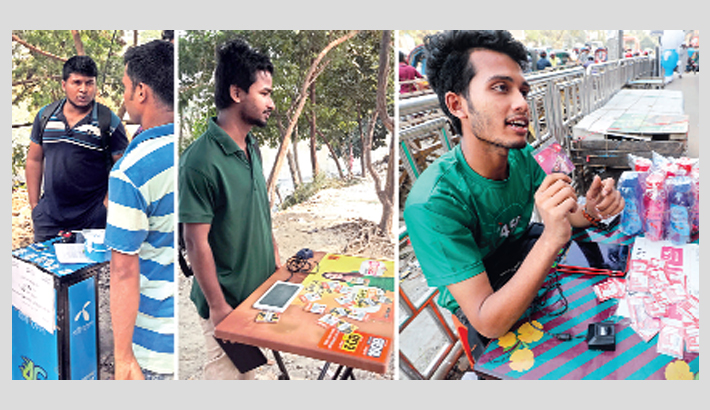 Footpath vendors are selling subscriber identification module (SIM) of different mobile operators in many areas in the capital. The photo was taken from Gulshan link road and Naya Paltan on Monday. — sun photo

In possibly one of the most secret use of mobile subscriber identity modules (SIM) cards for criminal and illegal VoIP termination has been the misuse of a loophole allowing the legal purchase of 75 SIMS in one name, according to a finding of the independent regulator Bangladesh Telecommunication Regulatory Commission (BTRC).

The BTRC, which was now set to act on stopping such malpractices, found a loophole in its five-year-old guideline on SIM registration after it conducted a series of inspections and drives against illegal VoIP using the SIMs of the GrameenPhone Ltd, the Robi Axiata Ltd, the Banglalink Digital Ltd and State-owned Teletalk Bangladesh Ltd.

The BTRC is now planning to review the old faulty guideline that allowed criminal activities and illegal VoIP call termination.

A four-member committee led by director general (SS) Brig. Gen. A B M Humayan Kabir has been formed to review policy on lack of coordination in biometric registration of SIM cards.

“We have formed the committee to find out loopholes of biometric registrations,” Jahirul Huque, the BTRC chairman, told the daily sun on Sunday. He said the committee was asked to submit a concrete report in this matter.

“The Illegal VoIP call termination has drastically reduced in recent times due to continuous drives. We have a zero tolerance against illegal activities,” he said.

According to BTRC findings, the single cell-phone subscriber can hold or purchase 75 SIM alone, thanks for allowing five detection parameter fixed by BTRC in 2015.

In 2015, the regulator published a policy guideline that allowed one subscriber to purchase 15 SIM by producing a NID. “If the subscriber don’t have NID, then he can also collect SIM for six months interim period by using his driving license, passport and self identification card under biometric verification process.

But, some dishonest businessmen and criminals have been purchasing at least 75 SIMs, official sources said.

The government is incurring losses in revenue worth thousands of crore of takas every year on account of the rampant rise in illegal VoIP calls, which has also dented the business of the organisations authorised to provide international gateway services.

Despite found guilty, the operators have sought to exemption the fine considering the loopholes of telecom act.

“I think the illegal VoIP call transmission will reduce significantly if thgere is goodwill between the regulator and cell-phone operators,” Ashraf h Chowdhury, a telecom expert said.

He said the criminal activities and illegal VoIP would then come down significantly.

Mohiuddin Ahmed, President of Bangladesh Mobile Phone Subscribers Association, said “our association had requested the BTRC not to allow more than four SIMs in one name. But, the regulator didn’t respond to our request.”

He added that “If anyone can use more than four SIMs then it is something wrong or can be misused like any criminal activities.”

“So the government should review the existing policy guideline,” he said.

Most of those SIMs were registered with the operators using fake biometric information, sources said.

Between October 14 and November 1, 2018, a total of 42,150 SIM cards were seized in raids by the BTRC in association with law enforcement agencies in the capital and the port city and 24 people were arrested on charges of running illegal voice over internet protocol (VoIP) operations.

Equipment worth Tk 1.23 crore was seized in the 23 drives in Dhaka and Chattogram, and the authorities also have filed 28 cases in this connection.

A subscriber would pay Tk 245 including SIM tax while collecting it from a customer care centre, Md Sabuj, a Robi Axiata marketing executive told the daily sun.

“But, we have offered per SIM at Tk 40 only with 2GB data services and eight minute free call at the sales in pavements,” he said, adding that “I sold minimum 250 SIMs per month and maximum 450 SIMs to earn maximum Tk 14500.”

Not only Robi, but also GP and Banglalink Digital Ltd are also selling SIM cards in different busy pavements.

Besides, the BL offers each SIM at Tk 30 with 1GB data and Tk 32 return balance at Gulshan lakeside.

The marketing executives admitted they have sometimes supplied bulk SIM to different persons with biometric verification.

“The nominal or free of cost SIM cards sales by cell phone retailers and distributors will encourage illegal VoIP and criminal activities,” it findings said.

BTRC has slapped mobile operators Grameenphone, Robi, Banglalink and Teletalk with a collective fine of Tk. 50 million for call terminations through illegal Voice over Internet Protocol (VoIP). Even after biometric registration, which was done to safeguard the telecoms against such illegal operations, SIMs of those mobile phone operators were used to terminate calls through illegal VoIP.

The BTRC conducted the drives after the recovery of huge illegal VoIP SIMs between March 3, 2018 and August 1, 2019.

According to the findings of the BTRC that it had allowed purchase of only 15 registered SIM by using the single identification. But it was unclear how the cards together using all the five identifications.  It suggested introduction of a central synchronization for registration of the biometric SIM cards by using all five documents.

It also recommended review the directives which is unclear about the procurement and registration of SIMs using biometric registration.

The BTRC found the retail and distribution level SIM cards sales by only flexiload exchange of nominal price.

The free of cost SIM sale by retailers can encourage illegal call termination. So the BTRC team proposed for a separate directive in this regard.