Riyadh to stay beside Dhaka on Rohingya issue 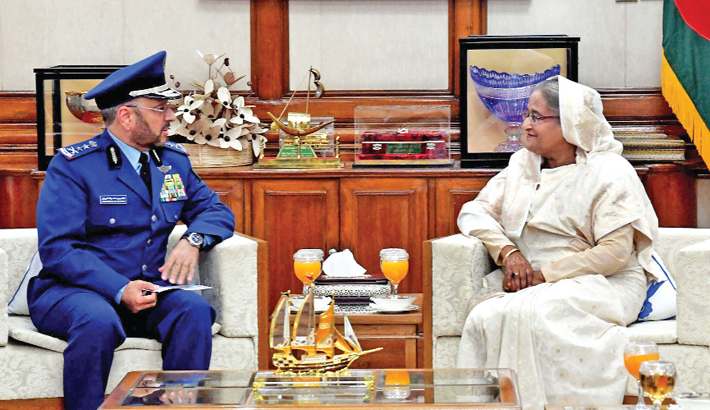 The Saudi chief of general staff said this when he paid a courtesy call on Prime Minister Sheikh Hasina at her official Ganabhaban residence on Wednesday afternoon.

Pointing out the excellent cooperation between Saudi and Bangladesh Armed Forces, General Fayyadh said the cooperation is being enhanced day by day.

The Saudi chief of general staff highly appreciated the training provided by the National Defence College (NDC) in Bangladesh.

“The quality of training of the NDC is very high and we want to continue to participate in the training,” he said.

General Fayyadh explained the Saudi position on Yemen issue and said: “We don’t want to go for aggression, we want peace.”

Referring to the conflicts among the Muslim Ummah, the prime minister said fraternity conflicts should be solved through discussion and negotiation.

“Due to conflicts, the benefit goes to the arms sellers,” she said.

In this context, the prime minister said Bangladesh got provocation on the Rohingya issue. “But we want to resolve the issue through negotiation,” she said.

Sheikh Hasina said Saudi Arabia has a special place in the hearts of the people of Bangladesh.

About terrorism, Sheikh Hasina said her government is creating awareness to combat the menace of terrorism engaging the people of all sections of society.