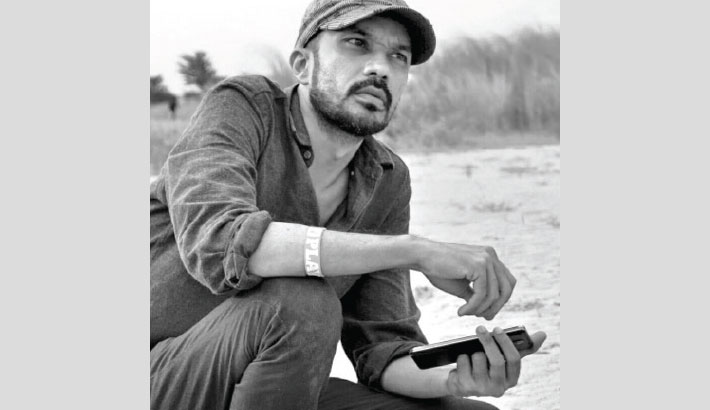 Between dilapidated buildings and a flying kite along with a woman set on fire, a brushfire as well as a bullet piercing a man’s heart was told a story unlike any other in a 5.07 minute short film. I am talking about The Attempted Band’s recently released music video of the song ‘Baruder Tarabati’ in which Imran was on guitars, Marshall on bass, Arafat on drums and Samin and Sarah were on vocals. Sound engineering was by Josh while music and lyrics were by Imran and Arafat. Directed by Ilajar Islam and starring eminent actor Mostofa Monwar and Sudipa Biswas, the team made a brave move by drawing the attention of the mass on a rather sensitive and possibly perilous issues. It is not very common to witness works of creative non-fiction with such a spectacular narration in a music video of our country especially on grave issues such as blogger killing (one can interpret that to be Avijit Roy), a mob pouring kerosene on a woman (synonymous with Nusrat Rafi’s murder) and also other fragments that can be

left to the viewer’s imagination. The man with the vision behind it all was none other than Ilajar Islam. As a prominent musician, drummer of The Attempted Band, Arafat Kazi pointed out, “The video for ‘Baruder Tarabati’ was entirely Ilajar bhai’s vision. When he does a music video he treats it like a story and a movie. That’s why his videos are the best.” Ilajar Islam is one the directors who had begun the legacy of music videos catered for rock audience, making one of the first videos for many bands we know now namely Black, Nemesis, Arbovirus, Kral, Stentorian, Artcell, The Watson Brothers etc. “I first started when Jewel Bhai from Miles approached us to do a video of Fusion City for his instrumental fusion-rock album X Factor.”

It all began back in 2004. Ilajar along with his school friends Ankan, Zubair and Rifat founded Firefly Productions. Around that time, Bangladesh’s first complete underground rock programme Rocklink that was hosted by Sumon from Aurthohin and Jewel from Miles, was held. “Every episode had two music videos which we did from Firefly. We also directed some of the initial episodes. Though I was getting ready to buy some gears for wildlife, instead I decided to dedicate my time solely in the UG sector because this was my line of passion.” Afterwards, there were some conflicts for which they mutually separated. Around 2006-2007, Ilajar founded Dog’s Day from where he has been creating all these outstanding videos and ads to this day. 15 years now and he is still going strong. Not only has he done countless videos for rock bands but also for pop artists such as Mila’s “Nacho” that gained millions of views on social media.

The creativity and excellent quality of his creations are at par with the international ones which is why they stand out the most whether they be rock, pop or RnB. Take Black’s “Ondho” song’s music video that was released in 2005 as an example where a country is seen going backwards. It was a powerful metaphor that was used to describe society back then. Coincidentally, the concept is relevant to this day and the theme has also been projected somewhat in ‘Baruder Tarubati.’  “We are living in a dark time when people are being murdered for difference of opinions. A time when some are murdered in broad daylight and the surrounding people are mute audiences (the woman’s plight in the video was symbolic to this). When I heard the song I thought it was brilliant. I found it an excellent opportunity to highlight these concurrent issues of society. Mostofa Monwar is a brilliant actor and has done an outstanding job in portraying the character. The cinematographer Sanny Hossain has pulled it off brilliantly. I am grateful to everyone in the team for turning a vision into reality.”

The director further added that a subtle darkness is emerging in our society which is making us numb. We are addicted to our cellphones and oblivious to others’ sufferings. “Writer Avijit’s murder took place in Ekushey Boi Mela in front of hundreds of people who did nothing. This traditional book fair is the most anticipated event for the mass readers and intellectuals of our country. But adjacent to that significant fair a liberal blogger was murdered brutally. In my music video I have portrayed how the present day intellectuals are being murdered in our country. Besides, a series of unexpected incidents of bullying students at public university halls, extrajudicial killing, mob justice and torturing women are taking place. Certainly our martyred intellectuals didn’t sacrifice their lives during our great Liberation War for establishing such a country. Video of ‘Baruder Tarabati’ is a snapshot of all such pains and frustrations.”