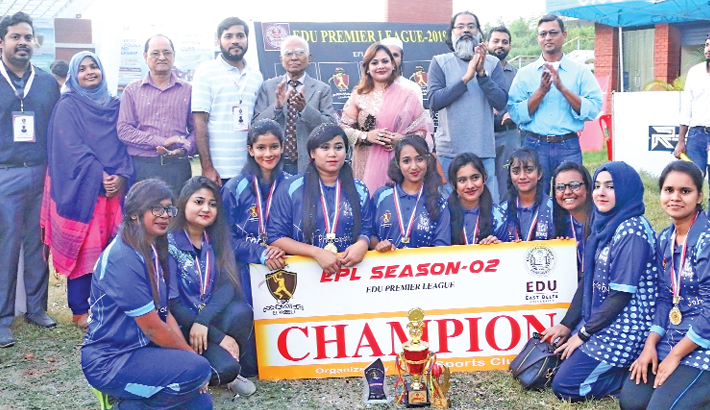 Winners pose for a photograph with guests after the final matches of ‘East Delta University Premier Cricket League 2019’ at the university playground in the city’s Mojaffar Nagar area on Sunday. — sun photo

The ten-day ‘East Delta University Premier Cricket League 2019’ (EPL 2019) ended at the university playground in Mojaffar Nagar area in the city on Sunday.

The cricket league was categorised into two parts where Cricket Hitters clinched the title of boys’ category and Cricket Diva’s the girls’ category.

Cricket Hitters defeated My Bros by four wickets while Cricket Diva’s the Black Eagles by six wickets at the final matches.

Addressing the ceremony, the VC Professor Sekandar said this is the high time to ensure gender equality and EDU believes in equal rights of boys and girls in every sector of the society.

“We ensured the participations of girls in the cricket tournament along the boys to encourage them,” he said.

EDU Founding Vice Chairman Sayeed Al Noman said they are providing many facilities to the students to engage with sports and other extracurricular activities.

“EDU is the only private university in Chattogram having permanent playground where different kinds of game are held for the students,” he said adding that it also has various indoor game facilities.

Adil’s Makeover, On Look Event Management and Kishwan were the sponsors of the EPL 2019.