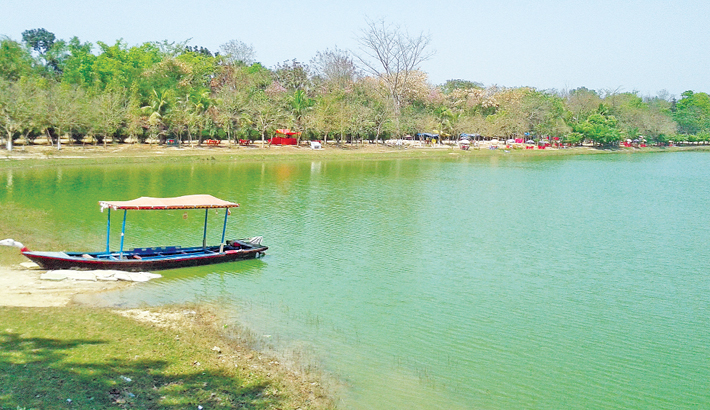 Bangladesh is a land of boundless beauty. The natural beauty and resources of this land attract a large number of tourists from home and abroad every year. Ramsagar Dighi is located in Dinajpur district under Rangpur division. It is one of the enchanting tourist spots situated in the northern region of Bangladesh.

It is the largest man-made water reservoir in the country. The eye-soothing Dighi is the most-frequently visited tourist destination in Dinajpur after the Kantajew Temple.  It is so big that a tourist standing on one of its bank can have a little view of the other bank like a foggy spot. However, a panoramic view in the horizon will amaze the tourists. Ramsagar Dighi has been experiencing a tourism boom as around 300,000 tourists visit here annually.

Ramsagar Dighi is located at Tejpur village, about eight-kilometre south of the district town. This beautiful large water tank - a must visit site for all- can easily be reached by private vehicles or other transports. Road connectivity from the northern town to Ramsagar Dighi is very good and can be reached by pucca road that runs through the heart of the vast green land. 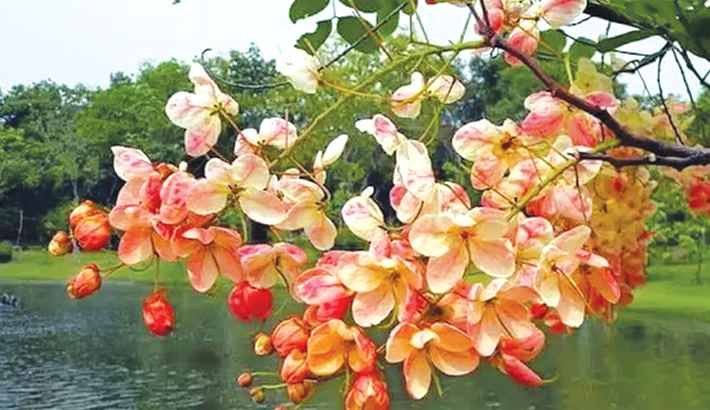 The massive water tank was established on 78 acres (31.53 hectres) of land by Raja Ram Nath during a period between mid-1750 to 1755. It was dug  on an elevated land and in rectangular form. The width of the lake is about 1079 metres (north-south)while the length is 192.6 metre (ast-west) It is believed that about 1.5 million workers took part in its digging work at a cost of about Tk 30 thousand at that time.

The reason behind digging of the large water tank is to meet the scarcity of drinking water. During the regime of Ram Nath, there was a persisting crisis of drinking water due to severe drought. There was no rainfall for three consecutive years. All the water reservoirs and natural ponds dried up and many people died owing to lack of drinking water and water-borne diseases.  Therefore, the Raja decided to dig the massive water tank for resolving the perennial crisis of water. According to history, water crisis did not recur after digging of this tank.

There exists various legends over digging of Ramsagar Dighi. One legend goes that water was not coming out of the ground during its digging. Raja Ram Nath organised sacrificial events and set a temple in the tank. At once  water started gushing out of the ground. The dighi is full of different types of fishes. The lake is also a safe zone for migratory birds. Ramsagar Dighi has already earned name and fame because of its scenic beauty. Local district administration looks after the Dighi.

To the northern side of the Dighi, there exists a raised land that contains the ruins of old dilapidated buildings. The buildings are in fact Hindu temples called Dev Mandirs. Many people call these temples as Baroduari (12 entrances) or Hazarduari (thousand entrances).

The interesting feature of Ramsagar Dighi is that it is surrounded by a lush green small forest, which is managed by the Department of Forest (DoF). Because of this feature, Ramsagar is termed as a sleeping queen which surrounded by a lush green forest. With the total area of about 60 hectres, this national park is full of many ornamental and fruit trees. Over the years, because of relentless efforts of the Department of Forest, a wide variety of trees and plants have grown here turning the park into a deep forest. On April 30, 2001, the Government of Bangladesh has declared it as a National Park. In this National Park, there is a natural zoo having animals like deer, wild boar, sloth bear, two rock pythons and monkeys et cetera.  The park also bustles with different kinds of native birds. Their chirping enchants the visiting tourists.

The national park is very popular to both domestic and foreign tourists. Some facilities have been created for tourists by the Department of Forest. These are rest rooms, picnic spots, and kiosks for selling cold drinks and refreshments. There is also a beautiful play ground for children. It is also a famous picnic spot. Bangladesh Tourism Corporation has taken up an ambitious programme to develop eco-tourism in and around this important national park.

Ramsagar Dighi can be reached easily from the capital city of Dhaka.  Firstly, tourists have to go to Dinajpur town by bus or train. They can also avail of the opportunity of traveling by air. Aeroplanes carrying tourists will land at Syeedpur Airport in Nilphamari district from where they will have to travel by bus to Dinajpur. Tourists can reach the National Park adjacent to Ramsagar Dighi by local transports. It will take about 30 to 40 minutes to reach the tourist spot from the district town. Tourists need not to stay over there. There are some good hotels in Dinajpur town, including a motel run by Bangladesh tourism corporation.  Tourists have to buy ticket for visiting Ramsagar Dighi.

The writer is Manager (PR) of Bangladesh Parjatan Corporation (BPC).