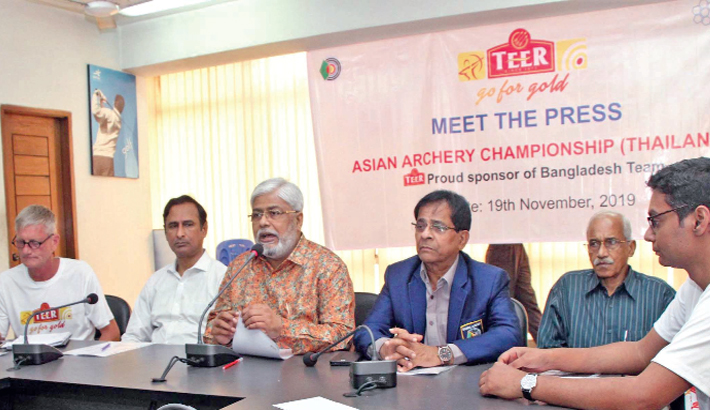 A 19-member Bangladesh National Archery team will leave for Thailand’s capital Bangkok on Thursday at 1:40pm to compete in the 21st Asian Archery Championships, at the Rajamangala National Stadium.

Bangladeshi archers will take part in the meet which is also Continental Qualification Tournament (CQT) for Tokyo Olympics’2020 as a part of their preparation for the upcoming 13th South Asian (SA) Games and to get women quota in the Tokyo Olympic Games, apart from Ruman Shana, who was directly qualified for biggest sports carnival of the world.

He also announced teams of 21st Asian Archery Championships and of the 13th South Asian Games scheduled to begin on December 1 in Nepal.

The BAF will also send 8-member technical team in the SA Games archery.

“We are mainly eyeing on SA Games, so our archers will take part in the Asian Archery Championships as part of their preparation for the SA Games. We will get some tough opponents there such as Sri Lanka, Bhutan and Nepal, so, we want to be well-prepared for them,” Chapal Said.

After being asked about the expectations centering the SA Games, he said “We are hoping for a big achievement there. We hope all the archers will do well in SA Games rather than a single archer.”

The 19-member Bangladesh team will return home from Bangkok on November 29 after completing their Asian Archery Championships and a 22-member contingent and an 8-member technical team will fly for Nepal on December 3.