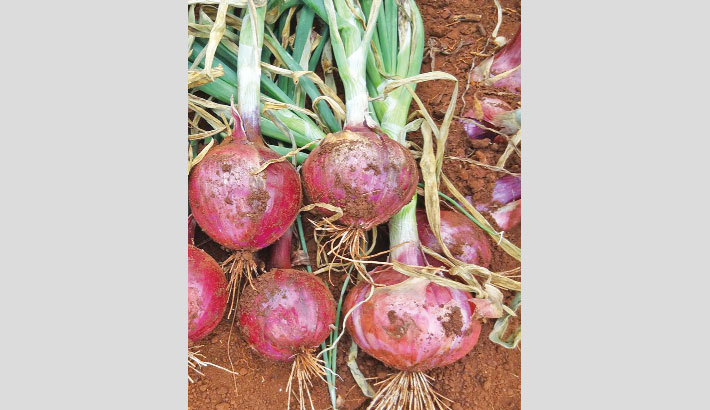 FARIDPUR: Amid its serious short supply across the country, the farmers here have started selling the newly-harvested local variety of onion, ‘Murikata’, at Tk 112 per kg.

Visiting Chitar Bazar, Moyendia Bazar and Joy Pasha Bazar in Boalmari upazila, the UNB correspondent found growers coming up with the local variety of onion on Saturday evening and selling it at Tk 4,500 per maund which means Tk 112.5 per kg, reports UNB.

Mawla Biswas, president of Chitar Bazar Banik Samity, told the agency the onion market will become stable soon as the locally-produced one started reaching the markets.

Besides, farmers of Majhardia and Baliagatti bazars in Saltha upazila also started selling ‘Murikata’ variety at Tk 4,500 per maund or Tk 112 per kg on Saturday afternoon. The old onion was selling at Tk 7,500 per maund.

The farmers who planted early variety of onion have already started harvesting it and most of them will be able to go for full-swing harvesting from the first week of December, he added.

“Farmers told me that they’ll be able to harvest onion in full swing within a few days,” the DC said hoping that the market will be stable soon when the local variety will be fully available.

However, the old onion is now selling at Tk 180 per kg in the local markets, Mollah added.

A DAE official said farmers of nine upazilas of the district usually produce at least 4.60 lakh metric tonnes of onion every year. In the current season, they have targeted to harvest some 60,000 mts of ‘Murikata’ variety onion, he said.