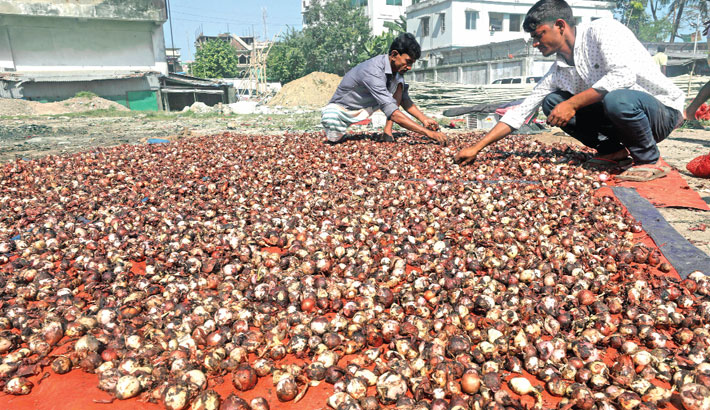 Workers dry rotten onion under the sun at Khatunganj wholesale market in Chattogram city on Saturday. Wholesalers have dumped a huge quantity of onion near the market after it has got rotten. —Rabin chowdhury

Amid the skyrocketing price of onion, black marketeers have created an artificial crisis of the kitchen item in the local markets to make brisk business.

Detectives are now in the field to unearth the cause of the sudden onion crisis in markets and its unusual price hike.

Intelligence agencies are also trying to find out the reason for the onion crisis and   nab the black marketers.  A huge quantity of onion hoared in warehouses has already rotten as sale of the item has drastically fallen due to sharp rise in its price.

Sensing presence of the intelligence personnel on markets, black marketeers who stockpiled onion in their godowns are dumping the rotten onion into the river Karnaphuli in Chattogram.

These dishonest businessmen are doing this at the dead of night to escape their skin, sources said.

The prime minister said, “I don’t know why onion price is jumping abnormally.”

“We’ve to see whether there is any conspiracy behind the sudden hike in onion price.”

The premier said this on Saturday while addressing the inaugural function of the Awami Swechchhasebak League council. In Chattogram, some owners of warehouses (aratdars) of the country’s largest wholesale market at Khatunganj in the city are dumping rotten onion.

Besides, some 15 to 16 tonnes of rotten onions were also dumped and cleaned up from the wholesale market by the conservancy workers of the Chattogram City Corporation (CCC) since Friday early hours.

Locals alleged that a section of unscrupulous traders stockpiled the onions expecting that the price will increase further. They are now dumping the perishable commodity as it started rotting.

The essential cooking ingredient was being sold at Tk 200 to Tk 250 at retail markets of the port city on Saturday.

Good quantity of onion was seen left on the bank and into the river Karnaphuli in Chaktai area.

The lower-income people were picking the comparatively good ones from those and drying for selling.

Trader Abul Bashar of the Khatunganj said there are some 15 to 20 warehouses at the wholesale market and some 100 to 150 sacks of onion are being rotten per day there.

“It requires more than one week for bringing the onion from Myanmar. Hot weather and lengthy import process caused the damage and are resulting in huge loss for the traders,” he said.

He, however, claimed that the perishable item cannot be stockpiled for a long time.

Moreover, many warehouses were inundated under influence of the cyclone ‘Bulbul.’ The onions might have been rotten at that time, he defended.

Some 16 tonnes of the onion were taken away by the conservancy workers of the CCC and dumped at the dumping station in the city’s Arefin Nagar area.

Concerned Conservancy Inspector Ahmad Safa said they took away some 15 to 16 tonnes of onion after getting information from the local ward councillor.

There was no onion of Egypt and China at the market since Thursday and those coming from Myanmar are being sold now, he said.

Some 168 tonnes of onion came on Friday and 70 tonnes till Saturday afternoon, informed the leader.

The wholesale price of the onion was around Tk 200 at the Khatunganj on Saturday, he added.

Mentionable, prices of onions were Tk 40 to Tk 50 per kg one and a half months ago.

But, price of the ingredient marked sharp rise and reached to Tk 250 at the retail market.

The price started increasing after India banned its export on September 29 this year.

The higher prices prompted the government to search for alternative markets while decision has already been taken for bringing onion through air shipment to tackle the ongoing crisis.