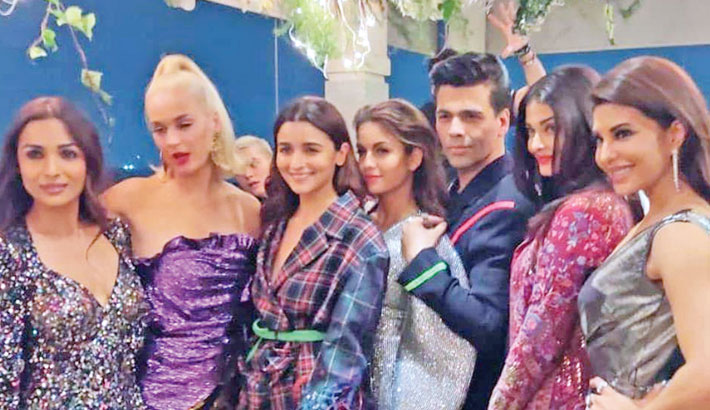 Karan Johar hosted a lavish house party that turned into a star-studded affair. The Bollywood bash was held at filmmaker's Mumbai residence to welcome American singer Katy Perry in the city, reports mid-day.

Many of the celebrities documented the fun night on their social media handles and thanked Karan for the wonderful evening.

Jacqueline shared a ravishing click of her with Perry, and Aishwarya on the Instagram story and Ananya too posted a happy picture of the two posing for the camera. 'Kabir Singh' actor Kiara Advani pouted with the American singer and sharing it on the Instagram story, she wrote, "Katy Pout." Three days into her stay in Mumbai, it has been all about work for Katy Perry. Although stationed at The St Regis in Lower Parel, the pop queen has been making trips to the DY Patil Stadium in Navi Mumbai to prep for her Saturday gig.

Special arrangements have been made at the five-star — an entire floor has been cordoned off for her and her team, with designated staff members assigned to Perry's duty. "She usually orders in her breakfast, comprising oat milk and something light to go with it. The kitchen has been getting requests for Asian vegetarian fare, especially dishes made with bok choy, which she enjoys gorging on. She is spending a large part of her day prepping for the concert," reveals the source.