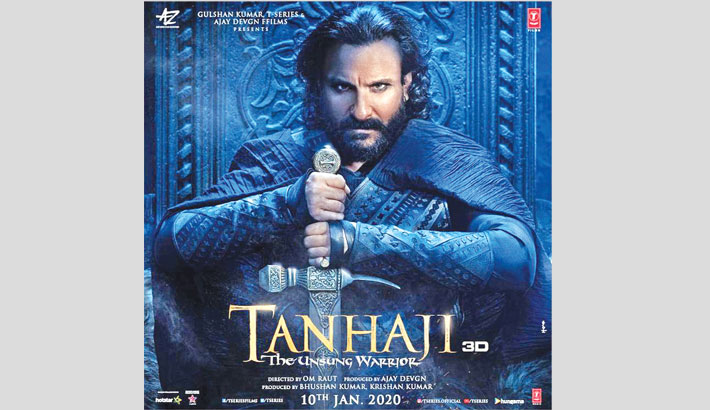 Saif Ali Khan, who was last seen in Laal Kaptaan, is all set to play the role of Uday Bhan in his upcoming film Tanhaji: The Unsung Warrior. After releasing the character poster of Ajay Devgn as Tanaji Malusare, the makers have released Saif's new character poster, reports Pinkvilla.

In the poster shared by Ajay Devgn on his Instagram account, Saif looks fierce, powerful and dark as Uday Bhan.

In the poster, we can see Saif holding a sword in his hand as he sits on a throne. His look shows vengeance and brutality. Ajay Devgn will be collaborating with Saif Ali Khan after their 2006 movie, Omkara which was a huge hit. On Ajay completing his 100th film, Shah Rukh Khan had shared the character poster of Ajay as Tanaji on social media. He penned a sweet note for Ajay and also mentioned how far Ajay has come along and referred to his signature two motorcycles split shot as well.

Directed by Om Raut, ‘Tanhaji: The Unsung Warrior’ is based on the life of Tanaji Malusare, an unsung warrior of the glorious Indian history and the military leader in the army of Chhatrapati Shivaji Maharaj. He was the founder of the Maratha Empire.