Mapping Through The Ages 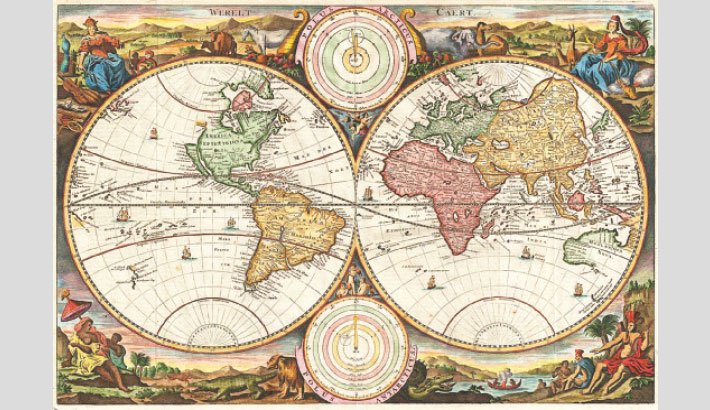 In this age of interconnected world of communications and social networking, maps have become more important than ever. Whether searching for the closest store, navigating a mountain trail or planning a foreign adventure, up-to-date, detailed interactive maps of every place on the earth are immediately available through mobile devices. Over a billion of maps are viewed monthly through apps and other platforms. Despite such popularity most of us do not know about the way the art of mapmaking evolved over the years.

Well, human beings have always sought to make sense of the world around them. Throughout history, mapmaking has been closely associated with new developments in scientific and technical tools. The look of the modern map - with its lines of latitude and longitude - can be traced to the once-revolutionary concept of a spherical earth, introduced by early Greek scholars along with a series of new instruments for locating and predicting the positions of celestial bodies. In the second century, the Greco-Egyptian geographer and astronomer Claudius Ptolemy provided detailed instructions for mathematical mapmaking in “Geographia”. He described the construction of map projections using latitude and longitude as the basic geographical frame of reference and the preparation of the first universal world map. But it was not until seafarers ventured far beyond the Mediterranean Sea and the coast of Europe that new devices for measuring angles and distances between visible objects - such as octants, quadrants, sextants and later, chronometers - greatly improved map accuracy.

The concept of a spherical earth was well known among Greek philosophers by the time of Aristotle and has been accepted by all geographers since then. Greek and Roman cartography reached a culmination with Claudius Ptolemaeus. His ‘world map’ depicted the Old World from about 60°N to 30°S latitudes. He wrote a monumental work, Guide to Geography (Geographike hyphygesis), which remained an authorative reference on world geography until the Renaissance period. During the Medieval period, European maps were dominated by religious views. The T-O (orbis terrarium) map was common. In this map format, Jerusalem was depicted at the center and east was oriented toward the map top. Viking explorations in the North Atlantic gradually were incorporated into the world view beginning in the 12th century. Meanwhile, cartography developed along more practical and realistic lines in Arabic lands, including the Mediterranean region. All maps were, of course, drawn and illuminated by hand, which made the distribution of maps extremely limited.

The invention of printing made maps much more widely available in the 15th century. Maps were at first printed using carved wooden blocks. Among the most important map makers of this period was Sebastian Münster of Basel (now Switzerland). His Geographia, published in 1540, became the new global standard for maps of the world. Printing with engraved copper plates appeared in the 16th century and continued to be the standard until photographic techniques were developed. Major advances in cartography took place during the Age of Exploration in the 15th and 16th centuries. Map makers responded with navigation charts, which depicted coast lines, islands, rivers, harbors, and features of sailing interest. Compass lines and other navigation aids were included, new map projections were devised, and globes were constructed. Such maps and globes were held in great value for economic, military, and diplomatic purposes, and so were often treated as national or commercial secrets.

The first whole-world maps began to appear in the early 16th century, following voyages by Columbus and others to the New World. The first true world map is generally credited to Martin Waldseemüller (1507). Maps became increasingly accurate and factual during the 17th, 18th and 19th centuries with the application of scientific methods.

As you can imagine, drawing the exact same map was very difficult. This meant early maps varied in quality. The amount of time and energy it took to create just one map also meant there weren't many maps produced. Over time, improvements in tools and technology helped cartographers refine their skills and produce better maps. Advances in technology not only had an impact on mapmaking, but on cartographic data gathering as well. However, in the recent years satellites have increased the speed at which data can be collected and have dramatically expanded the range of information to be put in the maps. What once took months or years to survey can be done in hours or minutes now. The surface of the earth is now mapped continuously by numerous remote-sensing satellites, producing vast archives of data that are received, analyzed and maintained by cartographers, scientists, and technicians worldwide.