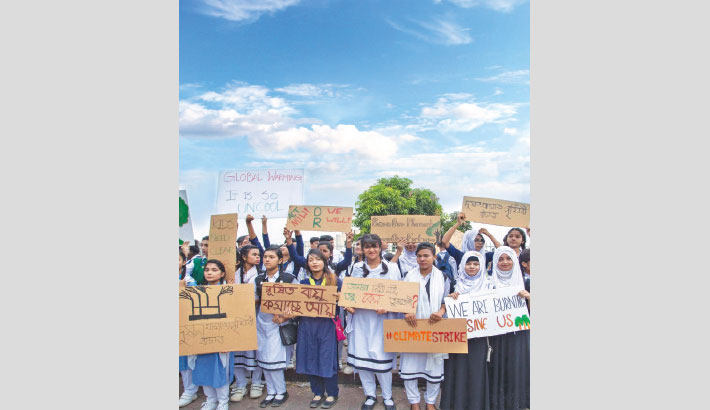 Two months back, Bangladeshi children made headlines in national and international newspapers for their praiseworthy effort in the stance against climate change. Nearly 3,000 school and college students took part in the protest rally jointly organized by Save the Children in Bangladesh and Green Saver Association on September 20 at Manik Mia Avenue. The participants urged the world leaders to act against climate change and also called upon people to be aware of the adverse impacts of climate change. Two months later, can that impact be felt? In order to understand the outcome, we must first take a closer look at the problem. 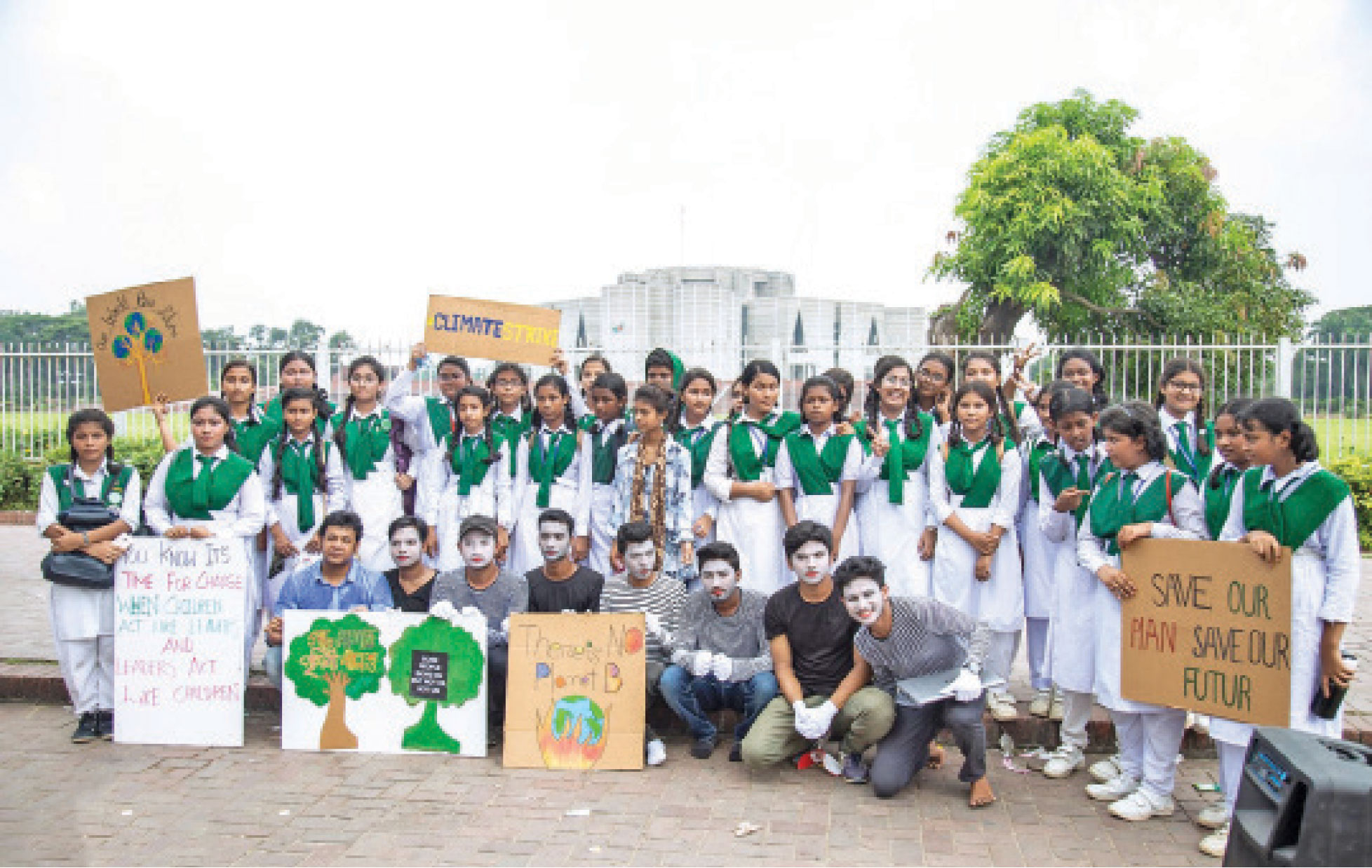 ‘Climate change’- these two words affect billions of people as well as other species living in the world today and yet only a certain portion of the population is worried about it. Swedish teenager Greta Thunberg is said to have activated this growing spark for the climate among children and adults all over the world. She first became known for her activism in August 2018 when, at the age of 15, she began spending her school days outside the Swedish parliament to call for stronger action on global warming by holding up a sign saying (in Swedish) ‘school strike for climate’. Her protest ignited a nationwide movement in Sweden thanks to social media. She inspired millions of people across 150 countries to take to the streets for the Global Strike For Climate. According to a report published by the Guardian on November 8, 2019, Greta’s efforts had a huge impact on global leaders, business tycoons, economists, social workers and other people of all 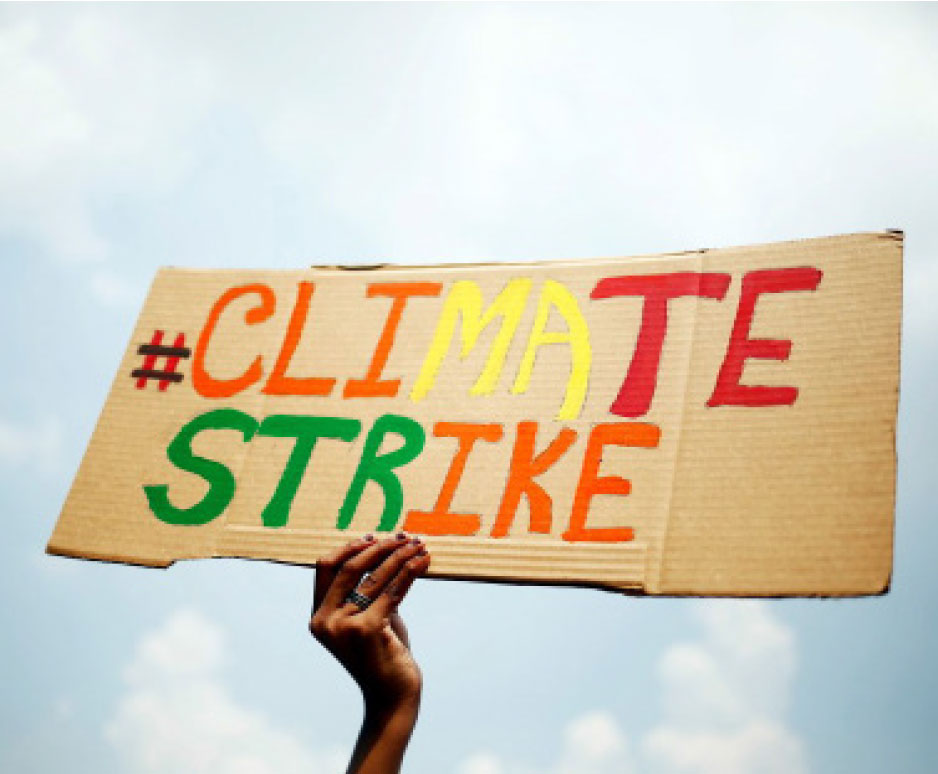 backgrounds. The report said, “Growing concern about the climate crisis and the ‘Greta Thunberg effect’ are driving huge increases in individuals and businesses choosing to offset their emissions by investing in carbon-reducing projects in developing countries.” It added that more and more people are growing interested in offsetting --- it means people are calculating emissions and then purchasing equivalent “credits” from projects that prevent or remove the emissions of an equivalent amount of greenhouse gases elsewhere.

Ahsan Rony, founder of Green Savers (that was one of the organizers of the protest), said, “There were children of all ages as well as teenagers and teachers. Their enthusiasm overwhelmed us all.” Green Savers has been a driving force in 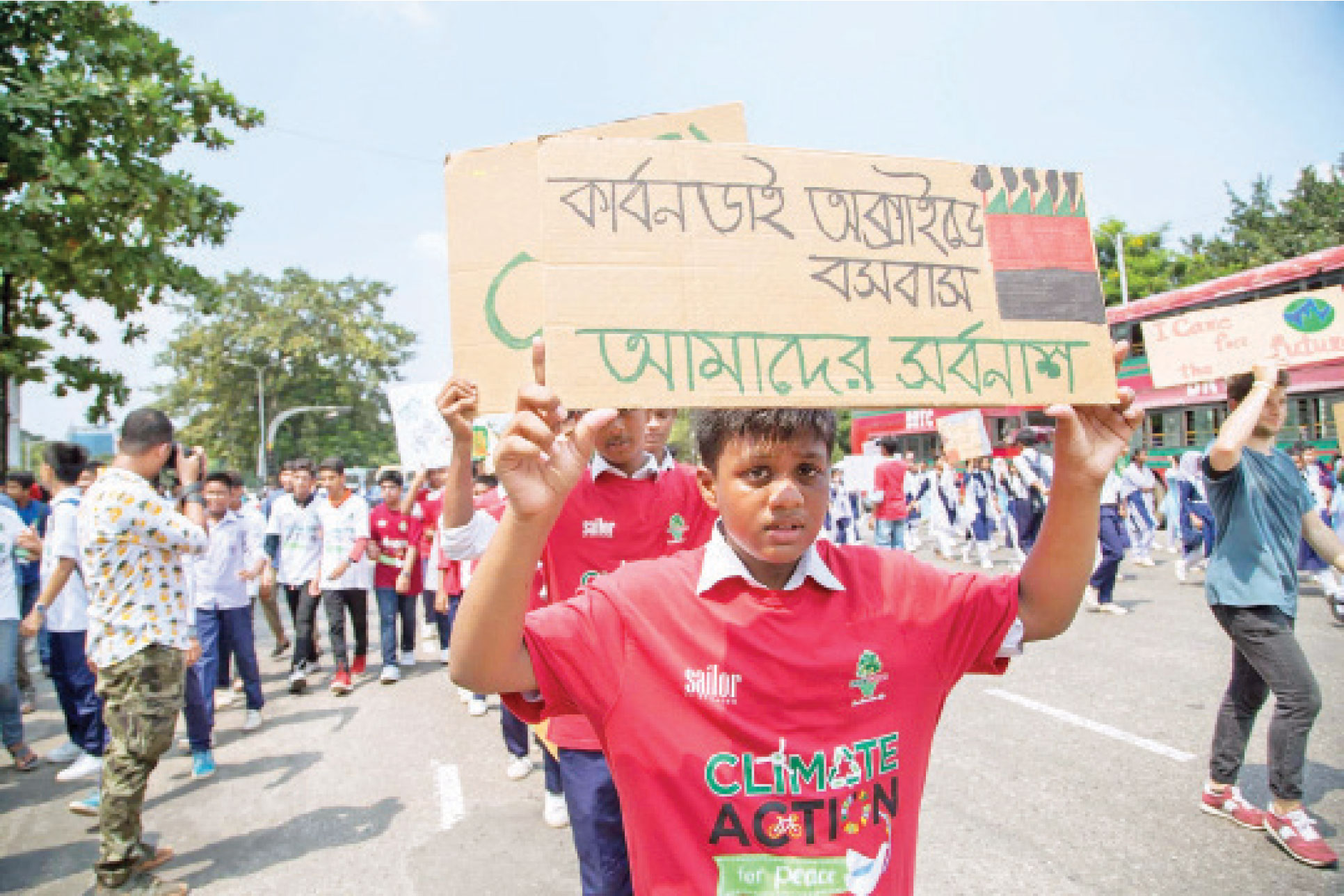 making the capital city greener ever since its incipient stage in 2010. Green Savers has achieved milestone victories in each of its projects. Not only had they made rooftops greener but they created smart services for people to avail such as ‘plant doctors’ to help people take care of their precious plants, oxygen banks, plant hospitals with ICU (for those who need to travel away from Dhaka/Bangladesh leaving their plants at home or office) and what not. In fact, their ideas are not just beneficial but also very creative. Involving children and integrating an environment where children create a bonding with plants is part of their goals. “Our approach is ‘envirotainment.’ We raise awareness among children regarding environmental issues, teach them about plants, nature, etc. but also make sure that the process is fun.”

Green Savers along with Sailor has started a campaign ‘Plant for Planet’ back in 2014 in various schools. Sailor has gifted them drums on which the school children draw how green they want to see their schools. “The child also writes down his 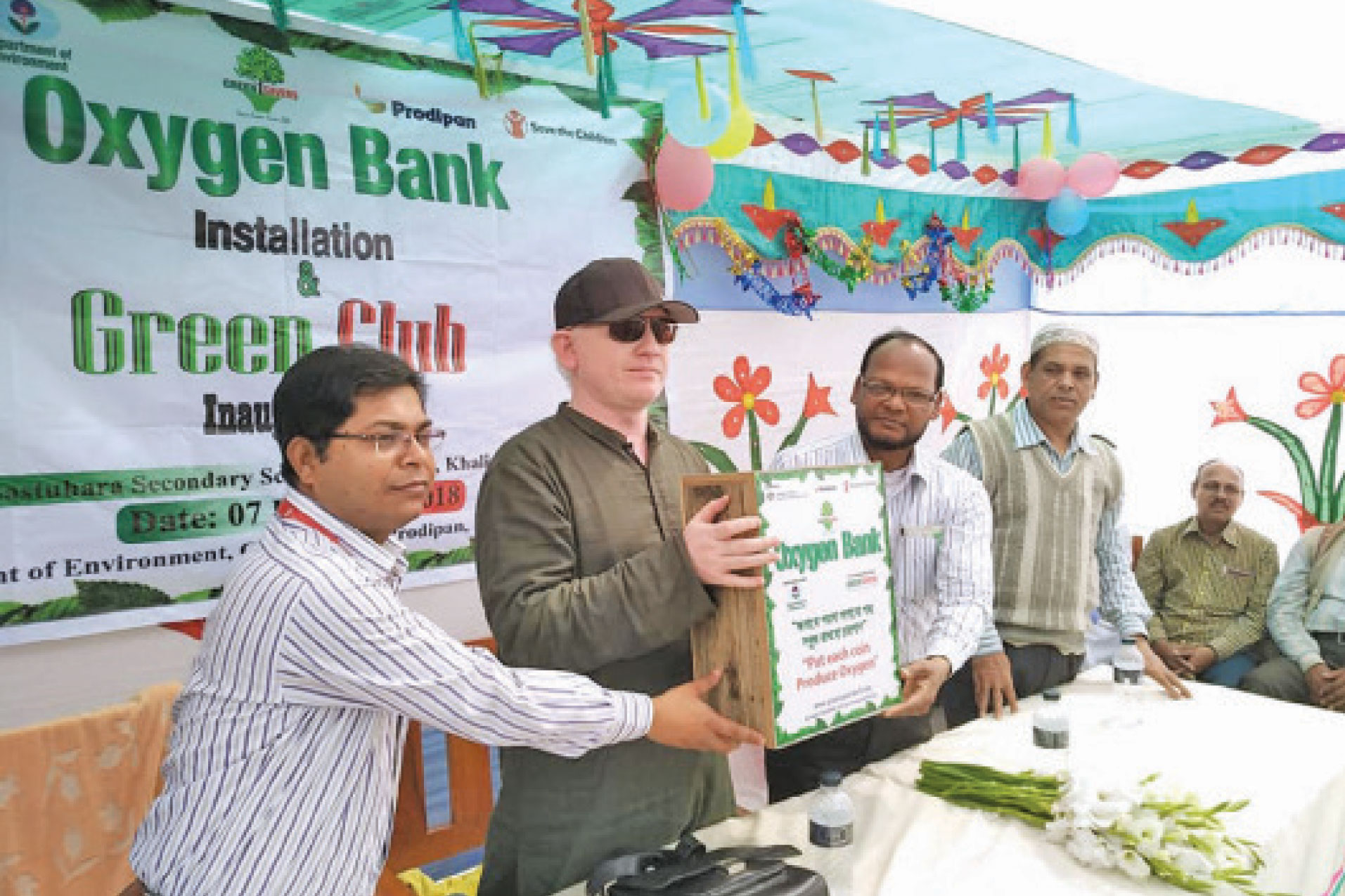 name, class and roll number so that a feeling of ownership of the plant is ingrained in him or her,” said the environmental activist. Around 30 trees are planted there and the campaign has reached around 44 schools till now. “When we tried to involve parents, they were not that interested. However, when we approached children, their response was so intriguing. They even went home and told their parents. Children are softer in nature and their kind hearts totally embraced the idea of getting new plants. In fact, children who are raised in nature with the affinity of trees tend to turn out better in life academically and morally. Green Saver Association has ‘Green Clubs’ in around 100 schools and that is how it was easier to connect with the children for the protest against climate change. This was not a movement they came to do once a day and forget later. In fact, through Green Savers, most of these children were already involved in loving, nurturing or growing plants from a few years back and, in turn, has a greater understanding related to climate change in comparison to many of their peers not just in the country but all over the world.” 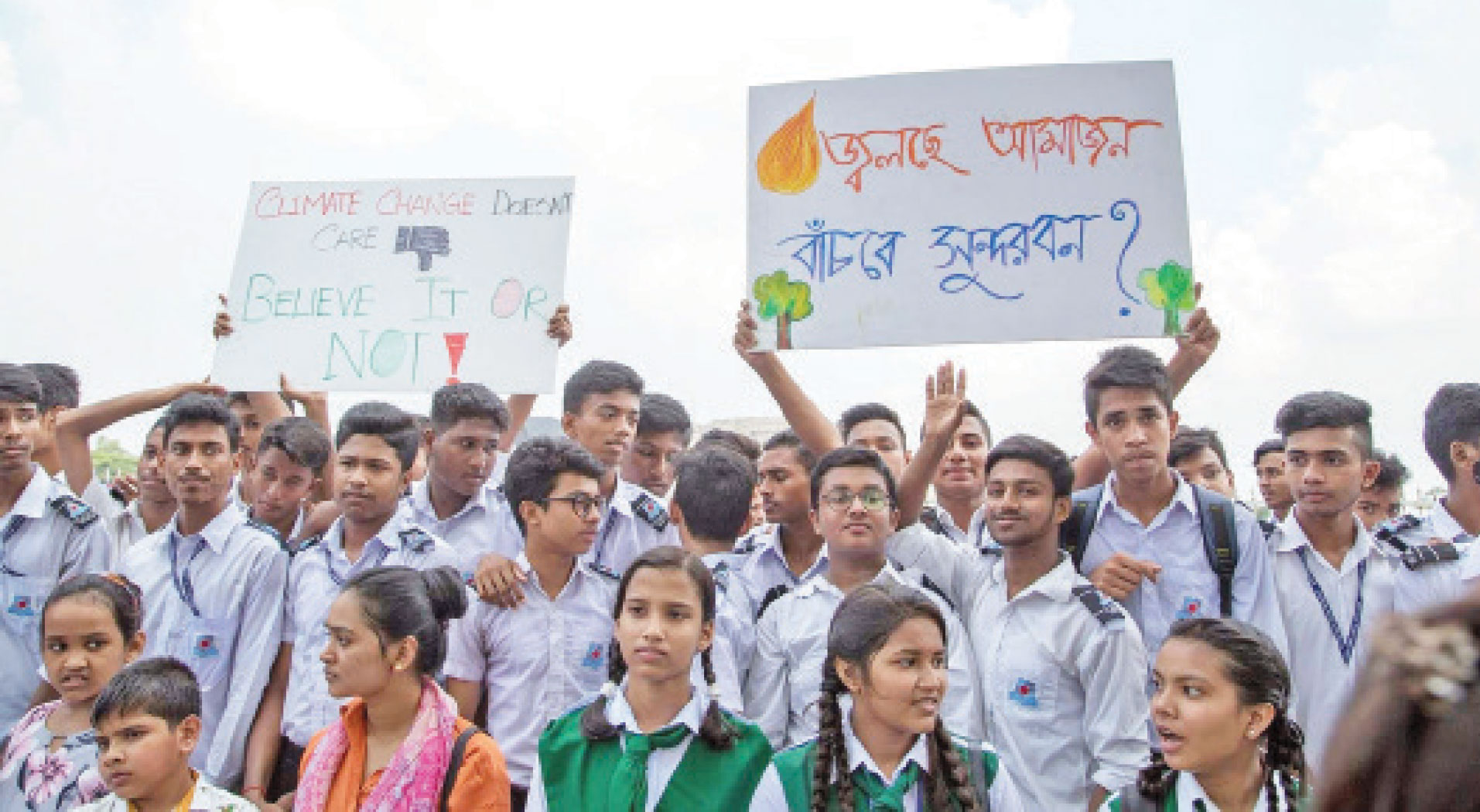 Hundreds of students of Dhanmondi Government Boy’s High School participated in the protest against climate change on September 20. AKM Mizanur Rahman, the school’s senior teacher, expressed his delight about the movement. “Our children are very much aware and involved regarding the environment. They participated in the protest with much élan. In fact, they also showcase their interest for nature here at school through different programs such as vegetable program, gardening program, etc. Our labs are also quite eco-friendly and we have various agricultural tools and other incentives to retain the enthusiasm of children regarding nature. Not just these kids but all the children at the protest demonstrated in-depth idea on the topic with witty and practical slogans. Punch 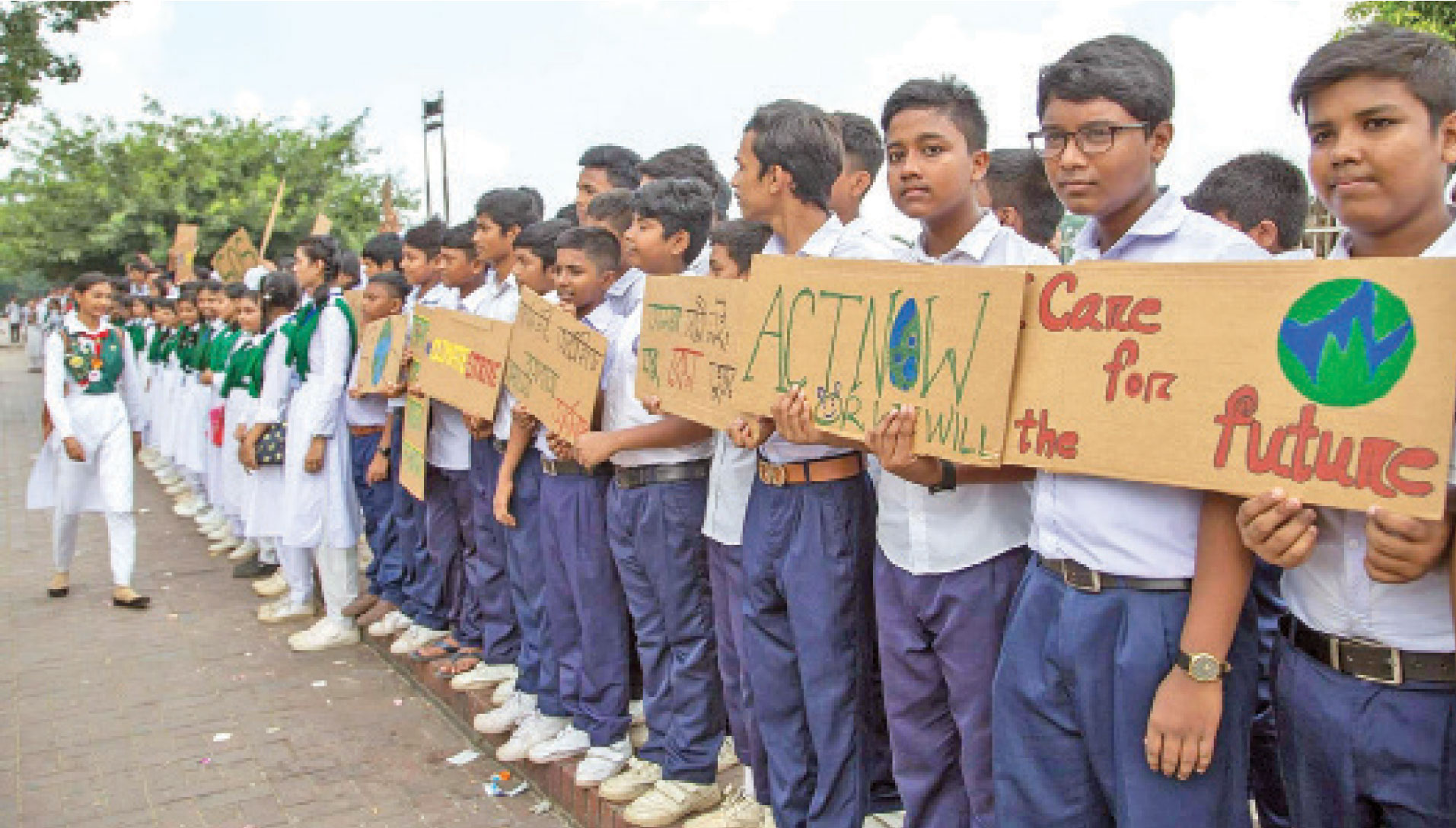 lines written on placards such as “Be the part of solution and not the part of the pollution,’ ‘Climate is changing, when will we?’, ‘There is no planet B’, etc. would have surely made Captain Planet proud!”

Well, being in a disaster-prone area only means that we all need to get active now. Effects of climate change are evident right before our very eyes. Children are the future generation. It is extremely commendable to see so many of them engaged in such activities- starting from the protest to growing trees in their local garden, houses and schools. In fact, it is perhaps the right time for the adults to join them in mass numbers.