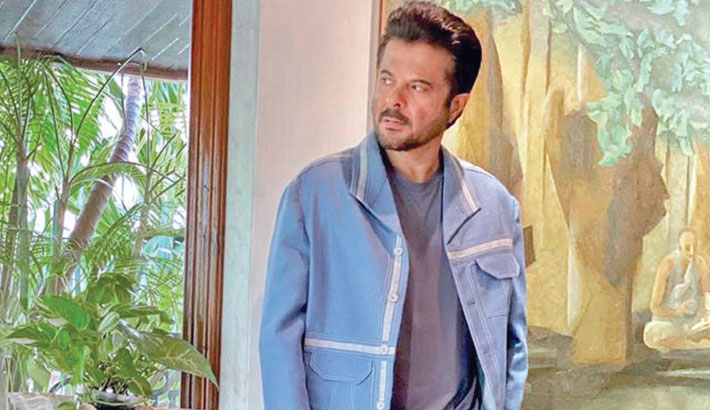 After four decades in Bollywood, Anil Kapoor feels he needs to learn how to go easy on himself, and that is his biggest challenge. The actor says he has always been his worst critic, reports Mid-day.

Anil entered the industry with a small role in 1979 with Umesh Mehra’s Hamare Tumhare, and then went on to carve his niche by balancing his stature as a respectable actor and his popularity as a saleable star, with performances including “Woh 7 Din”, “1942: A Love Story”, “Mr. India”, “Tezaab”, “Ram Lakhan”, “Lamhe”, “Beta”, “Taal”, “Nayak: The Real Hero” and “Pukar”.

At 62, he has managed to keep himself relevant in the forever fickle world of Bollywood showbiz, and his fit and sprightly persona defies his age. Anil insists his constant struggle is to go easy on himself.

“I’ve always been hard on myself and I’m always my own worst critic. So my biggest challenge continues to learn to go easy on myself and to let go when I need to,” Anil told IANS.

He says his career goals continue to be the same as they were all those years ago, when he was starting out.

“Strangely enough, my goals haven’t changed much! I’m a simple man with a simple plan—to be better than I was yesterday. So that’s what I continue to strive towards,” said the actor.

If anything, he has managed to stay relevant by experimenting with his craft and subjects, as trends changed in Bollywood over the past 40 years.

There have been the international forays, too. He featured in Danny Boyle’s Oscar-wiing global blockbuster “Slumdog Millionaire”, and also worked in “24”, “Mission: Impossible - Ghost Protocol” and “Family Guy”.

His versatility is proved by the fact that he was equally at home in these international projects as he was in out-and-out Bollywood outings as “No Entry”, “Welcome”, “Race”, “Dil Dhadakne Do”, “Mubarakan”, “Fanney Khan”, “Ek Ladki Ko Dekha Toh Aisa Laga” and “Total Dhamaal”.

“I’ve always believed that change is the only constant. So, I have let life and opportunities change me along the way, in the most organic ways possible. The only thing that hasn’t changed is the passion I feel for my work,” said the actor, who recently became part of a panel discussion by Royal Stag Barrel Select Large Short Films in Kolkata to decode “what makes films powerful”, as part of a six-city tour.

“Cinema is perhaps the most engaging way in which stories are told and shared”, he said, adding: “And stories have always had the power to shape minds and lives.”

The actor points out that power comes with a sense of responsibility.

“Anyone in a position to influence minds and hearts has a responsibility towards the people they are reaching. Not everyone is fortunate enough to have the right platform and a mouthpiece to communicate with the world, so when you do, it comes with the duty to be mindful of the message you’re sharing and affirming,” said the father of three. Anil will be back on the big screen in Anees Bazmee’s “Pagalpanti”, with whom he has in the past worked in “No Entry”, “Welcome”, “No Problem”, “Welcome Back” and “Mubarakan”.