Sher-e-Bangla Memorial Museum has been established on 27 decimals of land of Chakhar Boys’ High School and Memorial Girls’ High School in Barishal district. The eminent politician and public leader of the Indian subcontinent and undivided Bengal, Abul Kashem Fazlul Huq, who was better known as Sher-e-Bangla (Tiger of Bengal) A K Fazlul Huq was born in 1873 at Saturia village under the then Bakerganj district. He was the only son of Muhammad Wajed Ali Khan and Saidunnessa. But his ancestors lived at a village named Chakhar about 22 kilometres (13.7 miles) away from Barishal town. He was the Mayor (1935) of Kolkata, Chief Minister (1937-1943) of undivided Bengal, Chief Minister (1954) of East Bengal, Home Minister (1955) of Pakistan and Governor (1956-1958) of East Pakistan. He held many other high political and state positions. He was very meritorious and eloquent from his student life and he did his masters in Mathematics in 1896 from Kolkata University and obtained Bachelor of Law (BL) degree in 1997 from the Law College of Kolkata University. In 1906, he joined the government service as a Deputy Magistrate and served from 1908 to 1912 as an Assistant Registrar. Thereafter, he resigned from government service and chose to do public service and legal practice. At the advice of Sir Asutosh Mukherjee, he started practicing law at Kolkata High Court. He took his initial lessons in politics from Sir Khawaja Salimullah and Nawab Ali Chowdhury. In 1913, he was elected a member of the Bengal Legislative Council from Dhaka Division. 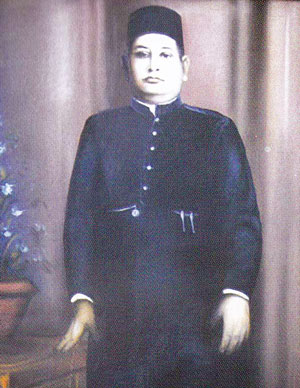 Besides being the Secretary of the Provincial Muslim League and President of All India Muslim League, Sher-e-Bangla A K Fazlul Huq held many other important political posts. He joined the Khilafat Movement in 1919 and extended his support to the Non-cooperation Movement that was waged to give up British titles and quit their commodities. In a bid to mitigate the sufferings of peasants, he implemented the Bengal Agricultural Debtors’ Act (1938) during the first Cabinet Period (1937-1941) and protected poor farmers from the clutch of money-lenders. With a view to removing the disparities faced by the Muslim communities, Sher-e-Bangla, as the Chief Minister of Bengal, ordered for reserving 50 percent service quota for the Muslims. During his tenure as the Education Minister, he also took effective measures to spread the light of education among the Muslim community fast. Sher-e-Bangla organised to form the Krisak Proja Party (Peasan Tenant Party) in 1935. His party successfully waged several movements to abolish the Zamindari system. He played a vital role in introducing the free primary education, abrogating all oppressive laws, freeing the state prisoners and releasing all political detainees, including those who were detained without trials.

Sher-e-Bangla was very simple in his personal and public life. He was loved by people irrespective of religion, caste and creed due to his liberal attitude and benevolence. People still remember Sher-e-Bangla A K Fazlul Huq with deep respect for his immense contributions towards the emancipation and establishment of the rights of the people. The great leader passed away in Dhaka in 1962.

In a bid to cherish the fond memory of Sher-e-Bangla and retain his achievements, Sher-e-Bangla Memorial Museum was established at Chakhar

at the initiative of the Department of Archaeology. The four-room museum consists of two display rooms, one office room, and a library. Whenever a visitor enters the museum, he/she will find a massive portrait of Sher-e-Bangla along with the synopsis of his life and work on its left. Another picture displays his social, political, family and other activities. The museum preserves the furniture and articles used by Sher-e-Bangla. These include easy chair, wooden bed, mattress, ‘alna’ (cloth hanger), dressing table, chair, table, walking stick, water glass and some other useful things. The museum remains open from 10:00 am to 5:00 pm on all days of the week.