All newcomers to AL not intruders: Quader 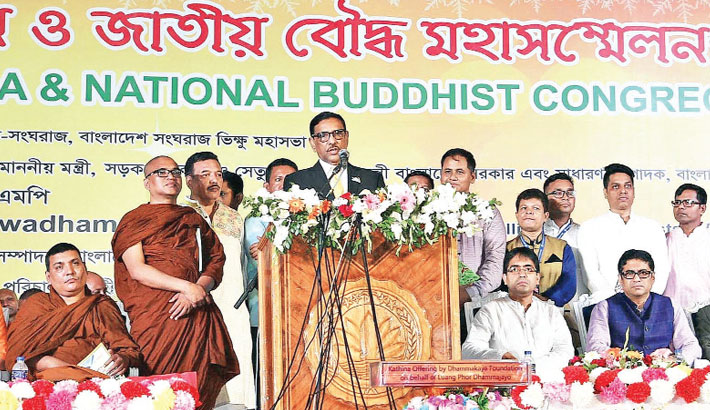 Road Transport and Bridges Minister Obaidul Quader speaks at a programme at International Buddhist Vihara in the capital on Friday on the occasion of the Kathin Chibar Dan and Jatiya Budhdha Mohasomelan. - SUN PHOTO

Awami League General Secretary Obaidul Quader on Friday said all newcomers to the party from different political backgrounds are not intruders.

Some of the newcomers are involved in communal and controversial activities being intruders,” he said.

Quader, also the road transport and bridges minister, was addressing a press conference at the party’s headquarters in the capital’s Gulistan.

Earlier, he attended two meetings with joint general secretaries and organising secretaries of the ruling party and Rajshahi district unit of the party.

“Those who are accused of specific allegations will not be allowed to remain in the party. Our party chief directed us to remove intruders,” he said.

Awami League has many leaders with different political background, he said.

None but controversial people may be ousted from the party, he said, adding that loyal and honest leaders and activists will be evaluated.

“None will remain in the same post for life,” he said.

Quader said party leaders have been advised to avoid any row among leaders and activists of Awami League’s associated bodies centering councils.

“The party wants to see healthy competition among the leaders and activists and it will not tolerate any sort of row over the council,” he said.

About resignation of senior leaders from the Bangladesh Nationalist Party (BNP), he said they resigned from the party protesting negative politics.