No love, but cruelty for handicapped child beggars 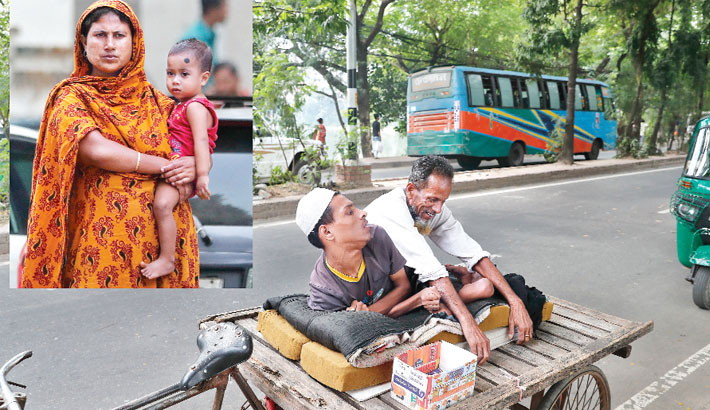 A man begs with his physically-challenged son by a rickshaw-van on a street in the capital's Gulshan Link Road area on Friday. (Inset), a female beggar stands on a road divider with her child in the same area. — Reaz Ahmed Sumon

In a country where it was a declared policy to bring up handicapped children and new born babies with love and care, syndicates of unscrupulous people as well as some cruel parents were using these unfortunate group to beg on the streets of Dhaka and other major cities to make a living.

Rain or shine these unscrupulous people giving a damn to the sufferings of these unfortunate children took away their day’s earnings by begging.

Law enforcers have in recent days arrested a number of syndicate that operated in the crowded capital city, but informed sources told the daily sun the criminals continued their business.

What came as a shock for this correspondent was that even some parents were found using their handicapped children or new born babies to make a living, despite some of them getting government’s disabled allowance.

A plastic bowl kept in front of her, a physically disabled girl child sat giving an empty look to the passersby in front of Nagar Bhaban, the headquarters of Dhaka South City Corporation.

Some of the passersby dropped a few coins on her bowl, although her sufferings would not help improve her life, but those who used her to make their own living.

A street vendor selling his goods nearby told this correspondent that one woman would leave the girl daily in the morning and took her home in the evening.

“Actually, the woman has no blood relation with the child. Every day, the child made  upto 600 Taka by begging,” he said. The child never missed a day rain or shine.

Another vendor, selling tea and cigarettes, echoed the other vendor with a note of regret.

On July 19, Assistant Superintendent of Police Sultana Esrat Jahan challenged a man who was begging with a newborn baby near the High Court area.

She along with the help of some traffic police personnel caught the man identified as Jahirul Islam, 40, and took him to a nearby police box.

Soon after a woman, named Joshna, claiming to be the man’s wife, came to the box. Both kept on claiming that the new born was their own child.

But finally, the officer came they admitted under police grilling that the baby was born to another woman at the Dhaka Medical College and Hospital and gave away the baby to the couple.  The couple used the new born for begging which brought them upto 1,000 Taka daily.

Nirmal, a sub-inspector of police, said the members of a syndicate stole babies and used them to make money by begging.

Kiron, an 11-year-old boy, was found begging on a cart in front of Madbarbari Baitus Salam Jame Mosque at Jagannathpur in Vatara.

A middle aged man Abdul Aziz, claiming to the handicapped child’s father, was holding the cart.

Asked why he was using his son for begging as he appeared to be having a good health, he said that he had four daughters and one son. “I am ill and I have no choice but to use my son for begging to make a living.”

In reply to a question, he said that his son got disabled allowance of 4,200Taka every six months, but that was not enough to support his family.

In Vatara area’s Abrar Ahmed Foot Over-bridge, two women and a man looked over a physically challenged child kept there to beg. His parents said that they were too poor and had to use their child for begging.

Police said there were similar syndicates in major cities of the country.