Efforts on to bring fugitive killers back: Quader 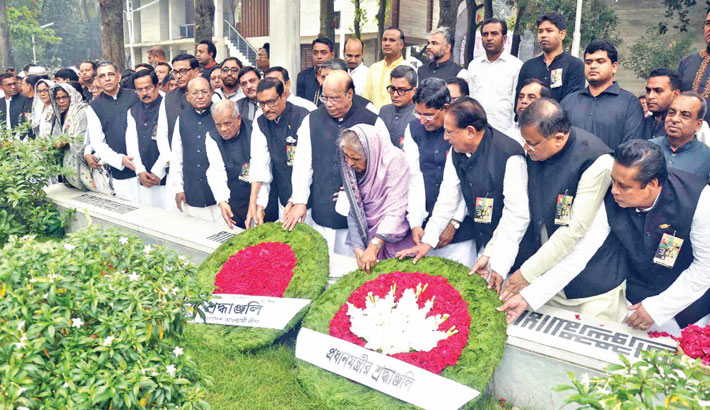 “Discussions with foreign countries are on to bring back convicted fugitive killers of four national leaders. This diplomatic effort will be strengthened further,” he said.

Quader, also road transport and bridges minister, said this while talking to reporters after paying homage to the portrait of Father of the Nation Bangabandhu Sheikh Mujibur Rahman in front of the Bangabandhu Memorial Museum at Dhanmondi-32, marking the Jail Killing Day.

Quader said the government had been facing difficulty bringing back the fugitive killers, as those countries do not have the provision of death penalty.

“Besides, effort is also on to bring back the fugitive killers of Father of the Nation Bangabandhu Sheikh Mujibur Rahman,” he said.

The minister further said that discussion is going on to form an inquiry commission on jail killing. He said the two brutal bloody incidents -- the assassination of Bangabandhu and most of his family members on August 15 and the killings of the four national leaders on November 3 in 1975 -- were intermingled and the outcome of the same conspiracy.

“Brutal killing of four national leaders, who led the Liberation War in the absence of Bangabandhu in 1971 and snatched the victory for the nation, was carried out to make the Awami League leaderless,” he said.

On November 3 in 1975, four national leaders — Tajuddin Ahmed, Syed Nazrul Islam, Capt Monsur Ali and AHM Kamruzzaman — were killed in captivity by some unruly army officials who were also involved in the killing of Bangabandhu Sheikh Mujibur Rahman.

Prime Minister and Awami League President Sheikh Hasina placed a wreath at the portrait of Bangabandhu at Dhanmondi in the capital for the day.

She also stood in solemn silence for a while in front of the portrait of Bangabandhu after paying tributes.

Later, Sheikh Hasina as the president of the Awami league, along with senior leaders placed another wreath at Bangabandhu’s portrait.

Leaders of the party also placed wreaths at the grave of AHM Kamruzzaman at Kadirganj in Rajshahi for the day.

A Milad Mahfil and a special Munajat were also offered at Banani graveyard.