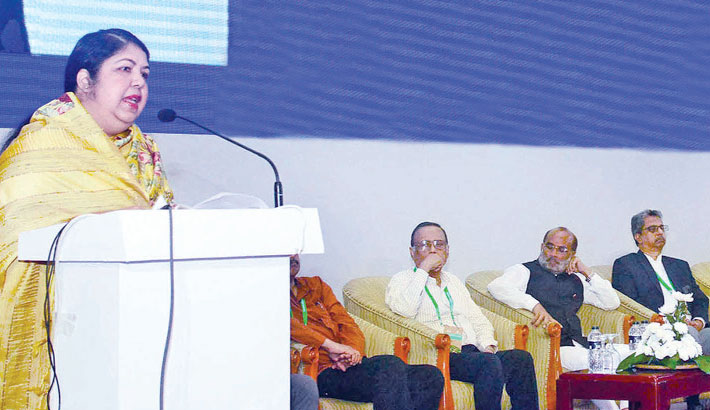 Speaker of Jatiya Sangsad Dr Shirin Sharmin Chaudhury speaks at the inaugural ceremony of the ArchAsia Forum-20 at Bangabandhu International Conference Centre in the capital on Sunday. - SUN PHOTO

The five-day long ArchAsia Forum-20, a conference of architects from Asian countries, began in the capital on Sunday.

Speaker of Jatiya Sangshad Dr Shirin Sharmin Chaudhury inaugurated the summit as chief guest in a programme at Bangabandhu International Conference Centre in the capital.

Architects Regional Council Asia (ArchAsia) and Institute of Architects Bangladesh (IAB) jointly organised the programme with an aim to raise awareness about architecture in society.

“The government is working to reduce the gap between urban and rural lifestyle according to electoral manifesto. Architects have significant role here to promote the country’s graduation to developing one ensuring inclusive growth,” she said.

ArchAsia Forum is the largest annual conference of its kind which hosts its 20th editions marking the fifty years of anniversary of the organization.