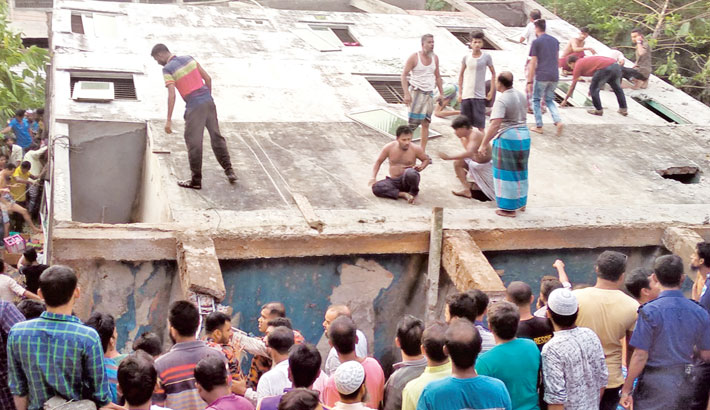 A four-storey under-construction building collapses in Baburail area of Narayanganj city on Sunday, killing a school student. Another person is feared trapped inside the building. – SUN PHOTO

A schoolboy died as a four-storey building along a canal collapsed in Baburail of Narayanganj sadar Sunday afternoon.

The victim is Shoeb Ahmed, a sixth-grader at Uzir Ali High School.

The incident also injured five more people who were admitted to a local hospital.

The house is owned by four persons. Sumon, brother of Sheuly Begum, one of the owners of the house, said that after Asr prayer, he saw the house cave in. A garage to the west side of the canal got smashed under the building, he added.

He said that one student named Wazit got trapped inside the building, as he went there to take lessons.

The fire service department said that the fault in the design of construction is preliminarily believed to be the reason for the collapse.