Masterminds to be unmasked: PM 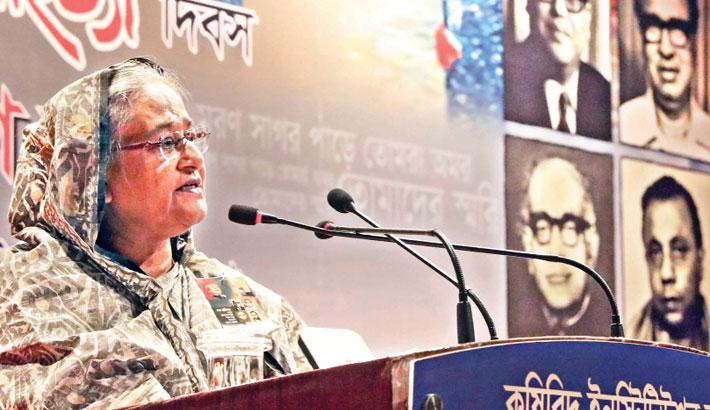 Prime Minister Sheikh Hasina on Sunday hoped that the face of the masterminds behind the August 15 and November 3 killings will be unmasked in the future.

“In the future, someone will surely catch these conspirators. That [day] will come…this must be done,” she said while addressing a discussion at Krishibid Institution in the capital.

On November 3 in 1975, the killers of Bangabandhu stormed into Dhaka Central Jail in the early hours and assassinated the four national leaders — Tajuddin Ahmed, Syed Nazrul Islam, Captain Mansur Ali and AHM Quamruzzaman.

In the absence of Bangabandhu in 1971, the four leaders led the Liberation War into a victory.

The premier said the ongoing drive against terrorism, militants, drugs and corruption would continue.

“Unjust and injustice will be eliminated from Bangladesh…the people of the country will have an improved socioeconomic status, and they’ll lead a beautiful life,” she said.

The prime minister said the sacrifice of millions of freedom fighters and martyrs cannot go in vein.

“It didn’t go in vein, no one will be able to make it futile in the future,” she said.

She said razakars, killers, al-badrs, al-shams, killers of 1975 and their companions and patrons will not get the chance to make Bangladesh their den again.

“The people of Bangladesh have to think like that way…no reign of terror can be established in this country again. The pace of development and democracy must continue…we must build a golden Bangladesh,” she said.

About the August 15 killing, Sheikh Hasina said that the move was to annihilate one family. “After the November 3 carnage, it got clear that the killings were political, and the anti-liberation forces did that to take revenge as Bangladesh achieved independence.”

Paying her tributes to the four national leaders, the premier said such barbaric killings inside the central jail are rare in the world history.

Sheikh Hasina blasted Ziaur Rahman and his wife Khaleda Zia for patronising the killers of Bangabandhu and four national leaders, freeing the Pakistani collaborators from jail and giving them positions in the government in different times since 1975.

“Bangladesh has passed a long way of bloodshed. The architect of the independence was killed along with the key persons of the War of Liberation. The gruesome murders were followed by indiscriminate killings of many armed forces officers, Awami League leaders and workers and common people,” she said.