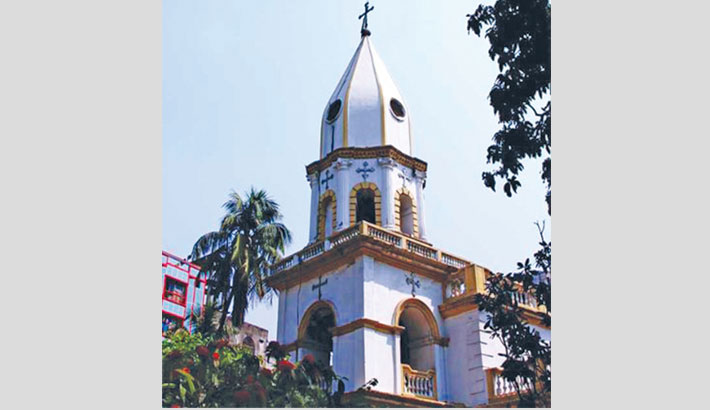 Armenian Church - a spectacular church as well as a heritage of Bangladesh located at Armanitola in old part of capital Dhaka city. The exact location of the church is on the church-road near Babu Bazar in between Sir Salimullah Medical College Hospital and Armanitola. Near the church, there is a library of many years old and a playground called Armanitola Math. The very name and location of the church indicate its origins and history. The Armenians established the church in the vicinity of their colony, who had settled in Dhaka in 17th Century A.D. The church built in 1781 is also the testimony of Armenians robust presence in Dhaka in terms of their activities like trade and commerce, politics and spreading education in the then East Bengal. The Armenians are believed to be the first jute traders in Dhaka.

The renowned philanthropist of the world Mother Teresa stayed in this church while her visit in Dhaka in 1996. Though the church has been declared as a religious and heritage site by the government of Bangladesh and is now under the custody of Department of Archaeology, an Armenian origin named Michael Joseph Martin used to look after it until 2014. Mr. Martin is believed to be the last Armenian living in Dhaka, who was involved in jute trading. He has retired from the business.

In 2014, Mr. Armen Arslanian, an Armenian who first came to Dhaka in 2008 but does not dwell in Dhaka, took the charge of it from Mr. Martin. Mr. Arslanian is the child of one of the Armenian genocide survivors from Cilicia who was brought up in Argentina and came to Dhaka in a business trip. While strolling through Armanitola in old Dhaka as a tourist, he came to know about the church and became very passionate to the church. He comes to the church every week. Since becoming the caretaker, he took a mission to redefine the ways in which the local community interacts with the church as both an active house of worship and a historical site.

The white and lemon-painted Armenian Church of the Holy Resurrection was the pivotal place of the Armenian living here in between 17 and 18 the century A.D. The site of present Church was a graveyard of Armenians. The Armenian Church was built upon a small chapel. At present, there still exists a graveyard with 350 epitaphs. Among all these epitaphs, a statue brought from Kolkata stands on the grave of Catachik Avitak Thomas, portraying his wife. The epitaph of the grave inscribed 'Best of Husband'. This beautiful church is 230m in length, which has four doors and twenty seven windows. The architectural design of the main floor is very attractive. It is divided into three parts - a platform enclosed by railings, a middle section with two-folding doors, and an area separated by a wooden fence for seating. There is a spiral staircase leading to the second floor of the church. There is a square tower on the church with a 'shonkhonil' on the top of it. Shonkhonil is a special type of turret used on the temple in India to show respect. The aisle of the church is fourteen feet wide. There are some beautiful paintings in the church, by the artist Charles Port. There is a room behind the stage used for baptism. The room is decorated with a three-foot deep marble baptismal font.

After the construction of the Armenian Church, about fifty years later, a clock was erected on its western side. There was hearsay that the clock's sound could be heard from six km away. Local people synchronise their watches with the sound the tower's bell. However, the clock stopped in 1880 and was not repaired. The clock fell down with a massive earthquake taken place in 1897.

The architectural design and colour of the church impresses many tourists. The plan of the building is rectangular with arched gate and arched door. The church once has been featured by BBC and AFP in their documentaries because of its rich history and architectural pattern. One will really be mesmerised having a glance of the church from inside.

A tombstone still exist shows the chronicle of Armenian in the area. An Armenian named Agaminus Catachik donated the land to build the church. Michel Cerkess, Aga Amnius, Merkers Poges and Okotavata Seorg assisted in building the church.

The Church carrys our historical legacy. This monument witnesses the foundation and evolution of Dhaka as the capital city of Bangladesh. It is like an oasis in old part of Dhaka city. This rich heritage is required to be preserved properly.

Everyday many tourists from different corners of the country and abroad come to see this wonderful monument because of its architectural value and historical significance. Students of different universities also visit the church to acquire knowledge about the construction style and history. Bangladesh Parjatan Corporation - the govt. tourism organisation as well as private tour operators of Bangladesh always include this church in their package of Dhaka sightseeing tour for domestic and foreign tourists. The church can be visited during the day-time. Tourists are advised to maintain sanctity of the church.

The writer is Manager, Bangladesh Toruism Corporation (BPC). He can be rached at: [email protected]