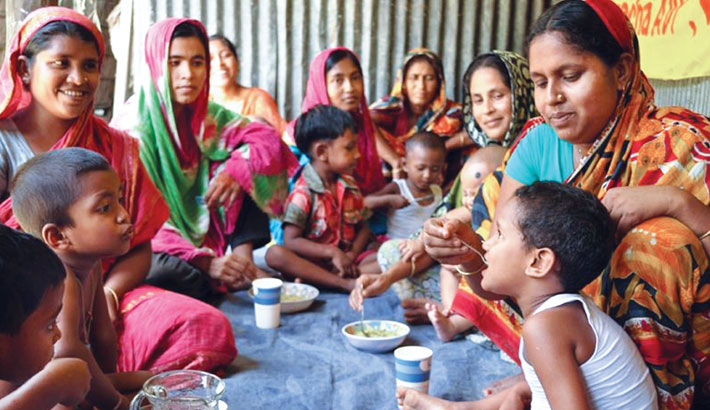 “Food security is a situation when all people, at all times, have physical and economic access to sufficient, safe and nutritious food to meet their dietary needs and food preferences for an active and healthy life,” according to  FAO constitution.

The right to food, an essential part of adequate standard of living, is a human right recognised by international human rights - UDHR and ICESCR. The WHO states about four pillars of food security - availability, access, utilization, and stability.

“Right to food” has been placed in our fundamental principle of state policy. It makes obligatory for the state to secure food, raise the level of nutrition and improve public health. This writing is not to assess and evaluate the adequacy of food arranged by the state but to examine to what extent constitutional commitment to socialist society has been reflected and accordingly ensured over the legislations as made thereof.

Giving a parallel effect to the International law as well as showing obligation to the constitutional commitment, the government has made Pure Food Act, 2013 (PFA) followed by Pure Food rule, 2014. But PFA has some loopholes which have thrown challenges over its implementation. It is also a challenge towards the establishment of constitutional commitment to secure rule of law and fundamental human rights.

The PFA specifies the area of adulterated food articles but it is silent about establishment of central Laboratory. That is why there remains a possibility of lab test standard variation which will certainly put question over the whole implementation procedure of this law.

The PFA provides for Pure Food Court (PFC) but till now hasn’t established separate courts. Conversely, SRO of 2015 entrusted regular courts with charge of PFC but it is quite inhuman for a court being already overburdened with backlogs of cases to carry out such additional charge.

Again, this Act prescribes the procedure to bring complaints either to judicial or administrative forum but most of the people don’t know where and how complaint is to be made because of unavailability of complaint places.

Again PFA provides for 5 years by PFC and SPA (Special Power Act, 1974) provides for death penalty for the same offence but the former contains overlapping effect over the later and such a saving clause will definitely cause a constitutional deviation. Besides option of the Authority’s chairman to choose forum of law is surely to contravene the basic pillars of administration of justice.

The PFA provides for four committees - National Pure Food Management Advisory Committee, Bangladesh Pure Food Authority, Central Pure Food Management Coordination Committee, Technical Committee. But centralisation of all committees is a great challenge towards the monitoring and supervision of all activities relating to manufacture, import, processing, storage, distribution and sale of food over the whole country. This is quite impossible for the capital placed committees to ensure access to safe food through exercise of appropriate scientific methods and to coordinate the activities of all the organisations concerned with food safety management. All these committees in absence of local visible wings can never extend their monitoring and supervisory hands to the field activities where most manufacturing and storage of food are located beyond Dhaka region.

The PFA prescribes coordination among all the committees but it is true that all committee members being controlled by different ministries are not beyond inter-ministerial outlook and interest which may have direct or indirect reflection on coordination as prescribed thereof.

Again this Act empowers the Authority to appoint Food Expert (FE) and Inspector (FI) as it thinks to be necessary but since jurisdictional area of FE, FI has not been determined, such appointment depends on Authority’s sweet will.

Besides centralization surely makes a supervisory and monitoring gap between the capital placed committee and field officer (FI). Again PCA prescribes special responsibility for the food businessmen if they believe the standard isn’t in accordance with the Act, they may withdraw adulterated food articles but the law doesn’t provide any effective inspirational mechanism and compensatory protection for such withdrawal.

Mentionable our honourable High Court Division in a Writ petition directed seize, destruction and stoppage of production of 52 adulterated food items with observation to declare war against adulteration. Definitely, it is high time to declare war but the loopholes having found in the Act are urgently needed to be removed out by way of doing certain jobs. The establishment of separate court (PFC), central lab, decentralization of all committees, District Committee composed of District Commissioner, Superintendent of Police under the head of CJM or CMM at the district level and Upozila Committee composed of Assistant Commissioner (Land), Assistant Superintendent of Police, food inspector under the head of respective Cognizance Magistrate at the upozila level, visible activation on part of all committees over the whole country may contribute to a greater extent to the implementation of this law.

To be concluded, overcoming the challenges has become a vital factor to attain, through planned economic growth, a constant increase of productive forces and a steady improvement in the standard of living of the people. The assurance of constitutional commitment to “Right to food security” depends on the proper implementation of this law and how state organs are ready to face all the challenges.